Warzone has just been updated to version 5.11.0! This blog post describes what’s changed.

The website and standalone clients have been updated to this version now. The Android and iOS apps will be updated within the next week or so.

Warzone Idle has a new dialog that shows you a list of all modifiers active on your empire, as well as a breakdown of where those modifiers are coming from: 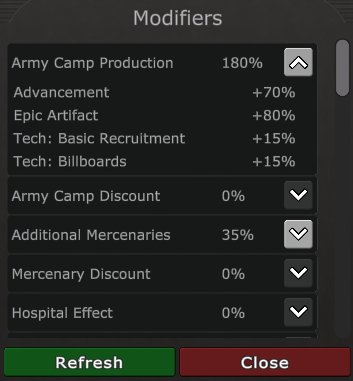 This helps keep track of what’s affecting your numbers. It’s available once you upgrade your Statistics advancement to level 2.

Warzone Idle can now send you Android or iOS notifications when certain events happen, such as:

You can enable or disable them in the settings menu. On Android, they’re enabled by default, but on iOS you must visit the settings menu and check the Notifications box or you won’t receive them.

– Idle levels 16: All levels we re-generated. This could cause costs, asset locations, recipes, etc. to be changed slightly. If you were in the middle of playing a level when you update to this version, you’ll keep playing the old version of the level. But all new levels started after updating will be on the new version of the level. For those keeping track at home, these new versions of the levels are called revision 16. Note if you start a new version of a level, then switch to a device using an older version of Warzone Idle, you won’t be able to play it there. Please update all your devices to the latest version to avoid this.
– Idle levels 16: Tuned territory income to be about 20-25% what bonus income is. Prior to this update, it was very inconsistent as some levels were too high and others too low.
– Idle levels 16: Resource caches now try to pick a resource with a quantity of at least 10 so that resource-modifying rewards can be more effective.
– All: When listing players on a timeslot, they’re now sorted by clan.
– All: Added a note about clan wars to the victory dialog after winning a clan war game.
– All: Clan war ratings no longer go negative.
– All: Fixed clan war timeslot countdown.
– All: Fixed clan war sign-up button saying “withdraw” on templates you weren’t signed up to.
– All: Fixed clan war rewards looking like they were claimable before you contributed to the clan war.
– All: Fixed clan war 2v2s game names from saying “x vs x vs x vs”
– All: Fixed the wins needed for next territory displayed on clan war page.
– All: Fixed new clans showing at the top of the clan list.
– Website: Adjusted Clan Wars glow so it looks better in Chrome.
– UJS: Fixed invisible bonus links being clickable, such as bonuses with no idle reward.