WarLight has just been updated to 2.06.0! This update adds the Unlockables page, the Mega Strategy Pack and the Mega Maps Pack.

There’s a new sub-tab under the home tab: Unlockables. This page shows all of the features that a WarLight account can unlock and tells you which you have unlocked.

Check it out to see what features you’ve unlocked and what’s left to get.

The Mega Strategy Pack unlocks dozens of new features within WarLight that you can use, such as all of cards and most of the game settings that WarLight offers. This is designed for players who don’t want to level up to unlock the features. See the list of everything it unlocks. The pack sells for $14.99.

The Mega Maps Pack makes all 1000+ of WarLight’s maps immediately available to you, regardless of your level. You’ll also get access to all new maps that map designers are releasing all the time. This is designed for players who don’t want to level up to unlock the maps. Check out the Mega Maps Pack for $14.99!

– If you want to change your name more often than every 5 levels, you can now purchase a name change for $3.99 which lets you change it immediately. This also gives a week of ad-free play.
– In the map designer, there’s now a separate button for editing a map’s unlock level that explains more about the process and also recommends a level to use.
– Map unlock levels are now capped at max level with a reward + 2, currently 55.
– Fixed a bug that caused territory linking to not work if the chat box was kept open from the lobby.

Season XV will play on the Poland Big map: 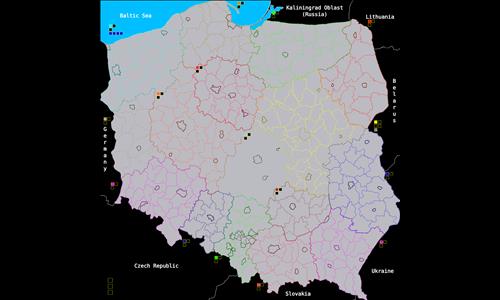 This map has a unique bonus system that creates different strategies than what we’re used to. The template was designed by Szeweningen and can be viewed using these links: Multi-Player, Single-Player