Warzone has just been updated to version 4.12.0! This update aims to reduce the number of boots that players experience during games. This blog post describes what’s changed.

Warzone’s boot feature is essential. Back in the old days, before booting was implemented, a single player leaving a game would render that game stuck forever. Booting solves this as it ensures that the players who wish to continue the game can do so.

However, in an ideal world, players would never get booted and would instead surrender. Some people don’t seem to understand the importance of surrendering and will simply walk away from games whenever they are losing. This manifests as players who show 40% or higher boot rates on their profile.

These players are bad for Warzone in a few ways. In real-time games, it’s always annoying when you’re playing a game and your opponent doesn’t surrender, as it requires you to sit there waiting for the boot timer to expire before you can move on.

Additionally, it’s a bad experience for the players who get booted as well, as they often find that their open games fill very slowly, or they have very few options available to them on the open games list due to prerequisites. I often get contacted by people who experience these troubles and have no idea that their boot behavior is what’s causing it.

This update aims to address this problem. Here’s how!

Players with boot rates over 5% will now be shown on the Open Games page how many games they’re missing out on due to their boot rate. A small message will appear at the top that says something like “87 games are being hidden due to your 60% boot rate”

This helps educate players on what they stand to gain by improving their boot rate.

The first time a player is booted (or every time if they have a high boot rate), they’ll be forced to endure a Surrender Tutorial. This is a new tutorial that walks them through how to press the surrender button in a game, and also educates them on why it’s better to surrender than get booted.

If you want to see what it’s like, use this link.

Some people have been booted thousands of times, which is a hole that is impossible to dig themselves out of. Now that they’re being educated on why they should stop getting booted, they need a way to return to single-digit boot percentages that doesn’t take years.

To accomplish that, all player’s boot percentages are now calculated based on their last 100 games instead of all games. This is a more accurate reflection on their likelihood to get booted from their next game.

In time, all of these changes combined should have a drastic reduction on the boot rates of players. I hope to post a graph of the boots per game ratio in a few months, and I expect to see a drop in the numbers in the weeks ahead of this update. Stay tuned!

Warzone has just been updated to version 4.11.0! This update adds chat rooms, as well as fixes bugs. This blog post describes what’s changed.

You can access the chat by selecting Community -> Chat on the website, or by clicking the chat button in the top right corner of the iOS/Android app (once it launches, see above). 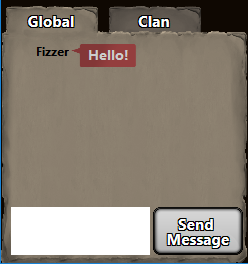 Not only does it allow chatting, it also shows activity going on in the community, such as forum posts, open games/tournaments, seasonal ladder activity, and more.

Global chat provides an easy way to see what’s going on in the community at this very moment. The goal of this is to help bring the community together, especially new players who are just getting started learning Warzone.

Clan chat makes it easy to talk to your clan members. If you’re in a clan and someone chats, you’ll see a small red number next to the chat room icon in the top right corner. Posts to your clan forum also show up here.

I realize that many clans have already adopted a third-party chatting system, such as Discord. I’m totally fine with that, and if it works for you, I suggest you keep using it. Warzone’s chat rooms will never be able to compete on features with Discord. However, Warzone’s chat room will help supplement your Discord channel in a few ways. For one, you can use it to help get new clan members into the discord. Two, it shows all posts to your clan forum (and coming soon, it’ll also show players joining/leaving the clan as well as title changes).

If someone in clan chat gets rowdy, clan managers have the ability to time them out. This deletes all their messages in the chat room and prevents them from chatting for a duration the clan manager specified.

More features will be added to the chat rooms soon. Give it a shot and let me know what you think of it so far!

– iOS/Android: Chat messages are now sent immediately when closing the software keyboard instead of requiring a second “send” press.
– iOS/Android: Fixed a bug that could cause single player progress to be lost when signing up for a new account.
– iOS/Android: Enabled autocorrect for software keyboards to aid in typing.
– Android: Fixed a bug that caused the app to crash on some devices.
– Unity: Added a link to the website’s profile from the unity profile page.
– Unity: Fixed a bug with adding/removing friends that caused the changes to not be reflected until the app was restarted.