Warzone has just been updated to version 4.19.0! This blog post describes what’s changed.

Game creators can now specify banking boot time to be added based on a schedule.

Prior to this update, it was only possible to start the game with banked time, which would never replenish after being used. Now, game creators can specify for banked time to replenish, as a factor of how much time passes. 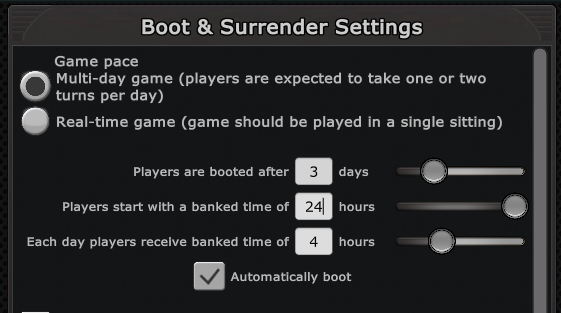 For example, let’s say you’re making a multi-day game with a 24 hour boot time and 24 hours of banked time. Starting with this update, you can now define that 4 hours of banked time is added to each player every day, which is awarded when the turn advances. This means that, over the course of a week, players will get 28 hours of time added to their bank. This allows players who are active 6 days of the week to still participate in that game, as they can skip one day per week and still not get booted.

Note that your banked time can never exceed the amount you started the game with. In the example above, no player could ever go over 24 hours of banked time, since that’s how much you started with.

Multi-day games now show the clock in the upper right corner just like real-time games do. This makes it easier to tell how much time you have left in a game.

Also when viewing a list of your games, multi-day games where it’s your turn now sort by how long you have until you get booted. This makes it much easier to see which games are in most danger since those games will always be put at the top of your list.

When creating a multi-player game, you now have the option to invite players via a code instead of inviting them directly:

You can then share this 4-digit code with anybody. They’ll be able to type it into a special box on the Open Games page which will join them to your game. This makes it much easier to start a game with your friends as it alleviates the need to enter all the players before starting.

Once all your friends have joined the game, the game creator can click on the new Start Game button to start it. Once it’s started, no more players can join it.

One specific use of this is making it easier for brand new players to get into a game with their friends. Prior to this update, the game creator had to either use e-mail invites, or wait for all players to make an account and then locate those friends’ accounts by hand. Now, they can just give the code to all their friends and everything will work out.

– All: Added new single-player levels, and tweaked some of the previously added ones. Thanks to Lepanto31 for level suggestions.
– All: Removed vote-to-boot.
– All: Fixed a bug that made points not be awarded for new single player levels in some cases. Thanks to Hornet for reporting this.
– Unity/UJS: The lobby now has a Start Game button that allows the game creator to start any multi-player game. For a non-code game, this is just a shortcut to removing all open seats and players who haven’t accepted the invite.
– Unity/UJS: Fixed a bug that made single-player levels with AI teammates not show their orders for the first turn after resuming a saved level. Thanks to Nemo for reporting this.
– Unity/UJS: Fixed a mod limitation to allow mods to transfer armies in an unsuccessful transfer order. Thanks to Krzystof for reporting this.
– Website: Fixed [hr] inside of [code]. Thanks to TBest for being the first to report this.
– Unity: The “Past Games” button on the multi-player tab is not shown to players with no games.
– iOS/Android: Fixed a bug with clan in-app purchase.

Warzone has just been updated to version 4.18.0! This blog post describes what’s changed.

The iOS/Android app now have official support for clans!

This means when you tap a clan icon in the Unity app, it will now let you see clan info directly in the app, instead of redirecting you to the website. There’s also a link to view your clan in the top right menu, as well as a link to view all clans on the Community tab.

Also, if you are invited to a clan, you will now receive a push notification, and you’ll be notified of the invitation via the top right button.

Upon opening the notification of a clan invite, you’ll be shown a new dialog that lets you accept or decline the clan invite.

This is a big improvement for clan invites! Prior to this update, invites only sent you an email. Many app users don’t even have email addresses registered, so they would never even know they were invited to a clan. Now, they can’t miss it.

Also, the store tab now allows for creating your own clan via an in-app purchase.

This helps a lot for keeping track of levels. Prior to this update, I frequently heard feedback that someone would start playing a level but weren’t able to finish. When they came back the next day, they weren’t able to find the level to resume their game.

– Unity: Fixed a bug that made clan chat not be registered as viewed, leaving the red number up when it shouldn’t have been. Thanks to ViralGoat for reporting this.
– Unity: Fixed a bug that caused an error when posting to an old forum thread. Thanks to number for reporting this.
– Website: Clan pages now show their icon.
– Website: To help reduce spam invites, clan managers can no longer invite someone to a clan that’s already in a clan. If someone wishes to move clans, they must first leave their existing one to receive an invite to the new one.

Warzone has just been updated to version 4.17.0! This blog post describes what’s changed.

Although I’ve always viewed Warzone’s multi-player as the best way to play it, there are surprisingly a lot of people who only play single-player. Those people haven’t gotten much love in terms of features over the years, but today they get some!

When single-player was first added in 2009, it was primarily designed to act as a tutorial to teach players how to play before they jumped into multi-player. Initially, it only had 5 levels! (three normal levels and two challenges). A 6th level was added shortly after and then eventually a tutorial level.

In 2016, single-player was expanded to 35 levels. It was still a tutorial of sorts, as most of the levels introduced a new concept or game mechanic. Community levels were also added at this time, which as exploded in popularity as they now approach 10,000 published levels!

With the Warzone release in 2017, offline play support was added.

Starting today, the single-player campaign is being expanded to a whopping 127 levels!

These are divided into two parts: The first 36 levels are still a tutorial, introducing new Warzone features (one was added to the previous 35 to introduce commerce mode, which didn’t exist in 2016). The remaining are some of the best community levels that have been copied into the main campaign to show them off more broadly.

In order to accomodate adding so many new levels, some of the way the app treats levels had to be re-worked. Prior to this update, all single-player levels in the campaign were embedded in the app. This was great as it allowed for offline play, but it wouldn’t scale to 127 levels since embedding all of the maps into the app would make the app too large. With this update, the app will download the levels and maps from the server for all levels after World War Pixel. To help enable offline play, the app will pre-download the next 5 levels in the campaign to your device ahead of time. This will enable you to play five levels without an internet connection. You can see this work if you look at the single-player tab and look at the bottom right corner of a level’s thumbnail. If this level is not cached on your device, a small internet icon will appear to let you know that you need an active internet connection to play that level.

This update also now adds the ability to skip levels if you’re having a hard time with them. If the app detects that you’re struggling with a level, it will ask you if you want to skip. You can always come back to a skipped level in the future.

Additionally, due to the increased level count, player’s profiles no longer list the names of all the levels, as this would get too long. Instead, it simply shows the number of wins, gold stars, and skips.

– All: Made level World War Pixel easier since it’s no longer the final level.
– All: Profile pages now show some quickmatch ratings.
– All: Fixed a bug in team games with huge numbers of orders. Thanks to krinid for reporting this.
– Unity/UJS: The stroke opacity on a map’s bonus links are now displayed correctly. Thanks to NinjaNic for reporting this.
– Unity/UJS: Improved the quickmatch tutorial.
– Unity/UJS: Links sent in chat by players using the red color are now white instead of blue.
– Unity: If no open tournament is available, the My Games page will now show a random open game instead.
– Unity: Replaced the multi-player “Play now” arrow with a less intrusive button highlight.
– UJS: Fixed a bug with the map designer that made bonuses not register their bonus link right after being added. Thanks to Bane for reporting this.
– Website: The “Switch Web Mode” link is being moved into the Account Settings page. The old link will remain for a bit to tell people where to go if they need to switch.