WarLight has just been updated to version 3.12.4! This update brings new images for cards, as well as a few minor improvements and bug fixes. This blog post describes what’s changed.

WarLight has new graphics for all 13 cards! This is just a graphic change — the functionality of all the cards remains the same.

The images were drawn by Sam Trout

– When a game ends due to elimination, orders now stop executing immediately instead of playing out the rest of the final turn.
– Added an icon for games that use commanders on the multi-player dashboard.
– On the map page, removed the links to create a game if you aren’t a high enough level to use the map.
– Multiple commanders can no longer die in a single attack/transfer order. This was only possible when offensive and defensive kill rates were set to 100%. The defender’s commander will simply not die.
– When loading templates, players who aren’t on your invite list are preserved. This fixes a bug when creating games that caused players that were added by searching to disappear when clicking Change Players.
– Fixed a bug in the My Games section that caused the team icon to not appear on games in the lobby when random teams were enabled.
– Fixed a bug that made single-player templates created via the “start with this map” link be considered built-in templates.
– Fixed a bug that made the AI sometimes attempt to send its commander to multiple territories.
– Fixed a bug that caused tournaments not use the description that was entered when it was created.
– Fixed a bug with the sockets feature that caused it to not receive updates if multiple clients were connected from the same IP.
– Tournaments exported to challonge now set the “quick advance” flag.

WarLight has just been updated to version 3.12.0! This blog post describes what’s changed. I hope you’ll also join me in my twitch.tv live stream this Tuesday at 11am where we’ll be talking through these changes in detail, and I’ll be answering your questions!

Commanders are a new feature that allows you to bring yourself into the battlefield! When commanders are enabled, all players in the game are given a special commander unit on one of their territories. 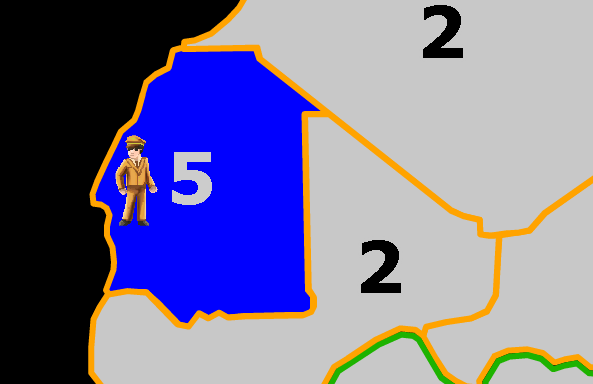 Commanders can attack, defend, and transfer in the same way that normal armies can. When you issue an attack or transfer order from a territory with a commander, a check-box will appear that allows you to optionally include the commander in that attack or transfer.

When in combat, commanders act like a stack of 7 armies. For example, if you attack with your commander along with 3 armies, it will do the same amount of damage that attacking with 10 armies would do. Similarly, if you are defending against an attack with your commander and 3 armies, you’ll do damage to the attacker equal to if you were defending with 10 armies.

When a commander engages in combat along with armies, the armies always take damage first (they’re protecting the commander with their life). For example, assume a territory has a commander plus 3 armies, and 10 armies attacks it. Using the default 60% kill rate, the 10 armies will do 6 damage. Since armies die first, the 3 armies die, and 3 damage would be left to be applied to the commander. Since it takes 7 damage to kill a commander, and commanders are never partially damaged, the 3 remaining damage does nothing. In order to kill a commander, all 7 damage must be done to it at once in a single attack.

For the most part, commanders follow the same rules as armies. For example, in multi-attack games, commanders can attack many times, but as soon as they transfer they can’t move again. However, unlike normal armies, commanders can not be transferred to a teammate (they must always remain on a territory you control.) Using an Airlift Card, commanders can be airlifted, as long as the destination is one of your own territories and not a teammate.

Only members may enable commanders for their games, however anybody can join a game that uses commanders.

During tomorrow’s live stream, we’ll go into more detail about how commanders work and I’ll be answering your questions about them.

“One Army Must Stand Guard” Setting

In all WarLight games you’ve played up until now, you’ve always had to leave one army behind on every territory. For example, if you owned a territory with 5 armies, only 4 were available for attacking with.

Now, game creators have the option to disable this requirement for their games. When the “one army must stand guard” setting is turned off, then all armies can be moved off of territories. For example, if you own a territory with 5 armies, then all 5 are available for attacks, transfers, or airlifts. If you move all 5 off, then zero will be left behind. You still retain ownership of a territory even when 0 armies are on it (i.e. it stays your color and counts towards bonuses).

This setting is available to all players, without restriction. In games with commanders, the One Army Stands Guard setting must be disabled.

In addition to the yearly option, WarLight now allows purchasing memberships monthly for $3.99 per month. Even better, you can get your first month for free! This allows everyone to check out Commanders along with the other member benefits. Get started today

The Abandon Card has a new name! However, the behavior is completely identical to before. The Abandon and Blockade cards have always been very similar cards, the only difference is in the timing of when they take place. The name change just makes it more clear how this card works to newcomers. See this discussion thread for more details, and thanks to Genghis for coming up with the name!

– Added a trophy for ranking first in the 3v3 ladder, just like the ones that exist for the 1v1 and 2v2 ladders.
– In Local Deployment games, the bonus names are now links which highlights the bonus that they correspond to.
– Initial armies per player territory setting can now be set to 0. (it used to require at least 1 minimum)
– The Mega Strategy Pack now unlocks ladder access instead of Membership.
– The experimental sockets feature now disconnects less often, and will automatically reconnect if it does get disconnected.
– The “automatically start once all players join” flag is now always on for real-time games and coin games.
– In the lobby, the “next game” button is now at the bottom instead of the top.
– When viewing a game you’re no longer in, there’s now a “Game Summary” button that can be used to recall the red summary window after it’s been closed.
– The “Rate this map” and “Share on Facebook” buttons were moved into the Game Summary window.
– The Game Summary window now provides links to history and graphs.
– To help combat spam, to post on the forum, players must now have a validated email address or be signing in through Facebook.
– In no-luck cyclic games, the move order is now viewable at the top of the Players window in addition to the top-left corner of the main game UI.
– Fixed a bug on the Unlockables page that made the 1v1 ladder say it unlocked on level 47 instead of 48.
– Fixed a bug that made https links on profiles not work.
– Fixed the Rematch button in custom coin games.
– Fixed a bug when browsing history that caused players to say “AI (was: xxx)” on the turn they took back control from the AI.
– Fixed a bug that messed up forum links when another forum tag was immediately after the link.
– Fixed a bug that made the Color Superiority achievement impossible to get against players who had secondary colors set.
– Fixed a bug that made the “speed” field that’s displayed when clicking on a player in a game wrong
– Fixed a bug with the CreateGame API that caused an error if all players passed were open seats.