I just released a quick update for the mobile client that fixes a bug. The bug was causing any games that used negative bonuses to not load. If you’re not playing in games with negative bonuses you don’t need to install this if you don’t want to.

Members can install this update via the usual method.

WarLight can now be played on Google Hangouts! Using your webcams and microphones, this allows you to replicate the board-game experience of having everyone in the same room, without actually needing to be there.

It’s completely free, so give it a shot and let me know what you think!

WarLight on Google Hangouts is a slightly scaled back version of WarLight. It supports most game settings, but it’s missing the member-only ones. It can only be used for real-time games, obviously. It supports 8 maps.

This works completely independently from the WarLight.net website. This means you can’t play your WarLight.net games from Google Hangouts, and wins don’t count towards your profile. Its primary goal is to serve as an introduction to WarLight. 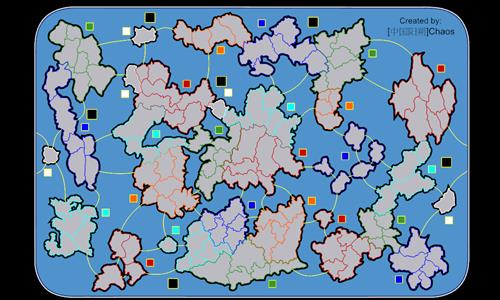 This is a slightly bigger map than Medium Earth, plus having fewer wastelands means there will be more room to work with than what we’re used to in Strategic 1v1. The wastelands will be size 15 instead of 10, however. We’ll keep the no-luck settings from last season since they proved to be popular. Next season will probably go back to normal luck.

As a twist, and to offset the larger map, this season will also feature Reconnaissance cards. These are the cards that let you spy on a single territory as well as all adjacent territories for a turn. Choose where you spy wisely!

You can begin practicing in the new settings using this template: multi-player, single-player.

The season will begin on the 21st at midnight GMT (effectively the 20th for those in negative timezones). Good luck!

Whoops! Last night’s Android release had a bug that caused the map to not re-draw correctly when anti-aliasing was enabled. This caused army numbers to not update and other visual artifacts.

I just released an update that fixes this. To fix the issue, you can either disable anti-aliasing in the Settings menu or install the latest version from the wiki which fixes it properly.

Thanks to everyone who reported it!

WarLight has just been updated to version 1.14.3! This blog post contains a summary of what’s changed.

It’s now possible to send other players links of territories/bonuses through chat! By holding down the control or shift keys on your keyboard while clicking a territory, its name will be inserted into the chat window:

When another player gets this message, they can click on the territory or bonus name, and the game will show them where it is on their map. This is great for coordinating within teams, especially on maps that players might not be familiar with.

When creating a game, WarLight no longer requires you to manually join your own game. This helps alleviate a point of confusion that’s sometimes felt by new players when they don’t realize they need to explicitly tell WarLight they want to join their own game. It was a bit silly since they already told WarLight that they want themselves in the game on the invite screen.

The exception to this is when players don’t get their color. In this case, WarLight will prompt them for their alternative color right after creating the game, and join them to the game once they select their color.

Up until now, all WarLight games have always automatically started once all players join it and all open seats are filled. Now, game creators can override this behavior, and make the game wait until they click the new Start Game button. This useful for team games where the game creator wants to ensure that the teams are even before starting the game.

The Start Game button can also be used before everyone has joined. This will start the game right away, even if there are non-accepted players or unfilled open seats. Using it in this way isn’t really a new feature, it’s just a shortcut to using the add/remove players button and removing all non-accepted players and all open seats.

The meaning behind the turn number that’s displayed in the upper-left corner has changed. Previously, this number displayed the number of turns that had passed in the game, not the turn number that was being built. This is a bit counter-intuitive to some players, so it’s being changed to represent the latter.

All this means is that it’s now one higher than before. For example, it will show “Turn 1” when a game first starts, and “Turn 2” once one turn has passed.

– Added icons to buttons and orders.
– Added a new open prerequisite, “prevent WarLight members from joining”. This is useful for creating free-membership tournaments.
– Minor updates were made to Small Earth, Earth, Medium Earth, Double Earth, and Double Medium Earth maps. No changes affected gameplay, this was just for fixing a few small visual problems and renaming a couple territories and one bonus.

Players running WarLight on their Android devices can install this new version via the usual method.

An anti-aliasing feature was added to the mobile client. This smooths out the map and helps it look better, particularly on low-resolution devices or when zoomed out. This defaults on and at 2x, but it can be turned off or increased to 4x in the settings.

If you try anti-aliasing, please let me know how well it works for you, along with what type of device you’re using. Anti-aliasing requires more memory from your device, so if you encounter any slowdowns from the previous release you can try turning it off in the settings.

– When the orders list is extended, the map now centers the action in the center of the visible area instead of the center of the screen.
– The screen now waits 3 seconds to dim after animations stop playing instead of dimming immediately.
– Bonus link numbers are now rendered at a higher resolution
– Added settings for invite list mode and e-mail visibility.

The biggest change everyone will notice are that the deploy/attack/confirmation links have been replaced with icons. I never liked the look of the blue underlined links that used to be there, and introducing icons to represent the three phases is useful for the mobile client since it won’t have enough room to display the words in some places.

Here are all of the other changes made to the website in this update:
– When inserting territory/bonus names into the chat box via the shift/ctrl hotkey, the caret now moves to the end of the line.
– Creating a game from a map’s page now skips the map selection step and goes straight to the customize settings step.
– Adjusted the tense of text that’s displayed in the orders list to be consistent. Future tense while you’re building your turn, and past tense when you’re watching a turn play out.
– When instant surrender is enabled, the player popup no longer shows text about who has accepted their surrender.
– Added a link to the map page from the map previewer.
– Added a scrollbar to the single-player level screen for small resolution screens.
– Added a scrollbar to the map design screen for maps with long descriptions.
– The orders, players, and selection areas of the game screen are no longer transparent. The selection panel is now hidden when nothing is selected.
– Fixed a bug that made the number of teams default to 0 when copying a team game’s settings.
– Fixed a bug that occurred when your internet connection died while trying to load a tournament.
– Fixed a bug that made the attack/transfer dialog default to -1 if you tried to issue an attack from a territory with 0 armies.
– Fixed a bug that caused the following settings to not save in single-player saved games: rounding mode, transfer/attack only, percentage attacks.

When the mobile client was first announced, it was originally stated to be targeted at phones, with a tablet version coming out later. I’ve since changed my mind on this. I’ve decided to combine the tablet and phone functionality onto one release. Now, both phones and tablets will be supported when the mobile client is done.

The last time that registrations were open for iOS devices, it was only open to iPhones and iPod touches. Now that iPads are officially on the radar, members with iPads are welcome to sign up for the alpha preview via this link (EDIT: Link removed – thanks to everyone who signed up!). If you have an iPhone or iPod touch you’re welcome to sign up too.

This release of the mobile client brings a bunch of improvements for tablets. Notably, the map no longer gets completely obscured by the attack/transfer dialog, and instead it pops up in a small window like the browser version does. Other tablet-related improvements have already been seen in previous releases, such as the orders list being able to co-exist on the map screen instead of being accessed by the menu.

Players running WarLight on their Android devices can install this new version via the usual method.

Here’s the full list of changes in this release:

– Added the ability to view game settings.
– Updated the look to match WarLight’s theme.
– Large-screen devices now have three buttons in the lower-right allowing them to switch between deploy, attack, and confirmation phases.
– The orders list no longer defaults extended on large-screen devices.
– The orders list now shrinks the map down if you open it while zoomed all the way out. This allows tablets to play with the full-screen map with the orders list up.
– While the deployment slider is up, the selected territory is now indicated on the map so it’s easy to remember which territory the slider is affecting.
– Increased the sensitivity of opening the orders list so it shouldn’t happen by accident anymore.
– Maps now scale their army numbers up along with other on-map items and bonus links. Maps default to a 20% scale up, but map creators can control this value and some maps are higher.
– Very large-screen devices now include a back button and the game title on the game screen.
– The settings panel can now change your e-mail address, password and name. You can also activate vacations.
– Fixed a bug that made Vote To End selectable when it shouldn’t have been possible.
– Fixed a bug that caused some maps to have an invisible stroke on some parts of some territories.
– Fixed a bug that made private messages you send not show up on your own screen.
– The hardware menu button can now be used as a substitute to clicking the on-screen Menu button.
– The Back button now works properly for pop-ups.
– The game now works on devices that don’t support gl blend modes.