How this works is simple: In a coin game, all players pay an entry fee when joining it, and if you win, you will receive WarLight coins. Coins can then be turned back into cash.

WarLight coins can be used to join coin games, withdrawn into cash, or used to purchase the unlockables that WarLight sells (memberships, clans, strategy/map packs, etc.)

It’s worth noting that coins don’t give you any in-game advantages. WarLight is, and has always been, a pure strategy game — there is no way to buy your way to victory.

The 3.0 launch will have two templates that can be used for coin games: a 1v1 similar to the Strategic 1v1 template, and a 4-player FFA. Our intent is to start small and expand into more settings over time. For legal reasons, coin games will always have to use pure skill settings: 0% luck modifier, straight round, and no-luck cyclic move order.

It’s important to understand that this is not gambling. Although you do take a risk when you pay to join a game, WarLight coin games have no randomness, which causes them to be legally defined as a “game of skill.” It’s legal to play games of skill in most areas of the world, however some jurisdictions will be prohibited, such as the following US states: Arizona, Connecticut, Florida, Illinois, Kansas, Kentucky, Maryland, North Dakota, Vermont, and District of Columbia.

If you live in a prohibited jurisdiction, you will still be able to play coin games, you just won’t be able to turn coins back into cash. Instead, you can use your winnings to buy unlockables (memberships, clans, strategy/map packs, etc.)

Our goal is to launch 3.0 on Saturday (December 6th). More concrete details will be announced when it goes live. I hope you’re ready for the most intense games of WarLight you’ll ever play!

https is the “secure” version of http, meaning that all of your traffic is encrypted which adds extra security. In plain http, the data your web browser sends to the WarLight server is not encrypted, so if someone was somehow able to see it, they could see what orders you were committing in a game, for example. This is usually only possible if they had control of a device that was routing your traffic, such as a wireless access point you were using. I’ve never heard of this actually happening on WarLight, but since it’s theoretically possible it’s worth fixing.

Eventually, it will be required for everyone to switch over to the https version. But for now, we’re in a transition period where both work, so you can choose which you’d like to use.

Please try it out and let me know if you run into any problems!

WarLight has just been updated to version 2.10! This update allows games to be played without any random factors, and also changes the default options and built-in templates to be luck-free.

Randomness is now off by default

With this update, new WarLight games will default to settings that don’t use any randomness (i.e. luck). This is a reversal of the old format, where luck options defaulted on and they could be turned off by game creators.

When randomness is disabled, there isn’t any luck in determining whether your attacks will succeed or fail. Also, you also know when you’ll move before your opponents, and what cards you’ll receive. This helps make games more fair and competitive.

Specifically, this is talking about four settings: The luck modifier, rounding mode, move order, and the minimum number of card pieces given to each card. These are the primary factors that control how much randomness affects WarLight games. By setting these values correctly, it can actually eliminate all randomness within WarLight games. (set the luck modifier to 0%, the rounding mode to straight round, the move order to no-luck cyclic (see below), and the minimum number of card pieces to the same value as the number of cards received each turn.)

Currently, when issuing attacks you can press the “Analyze” button to see a graph of the probabilities that your attack will succeed. However, with WarLight’s new emphasis on luck-free games, this graph doesn’t make a whole lot of sense, as the values will always fall on 0% or 100%. Therefore, in games with a luck modifier of 0% and a rounding mode of straight round, the probabilities graph is being replaced with a new graph called the “no-luck graph.” 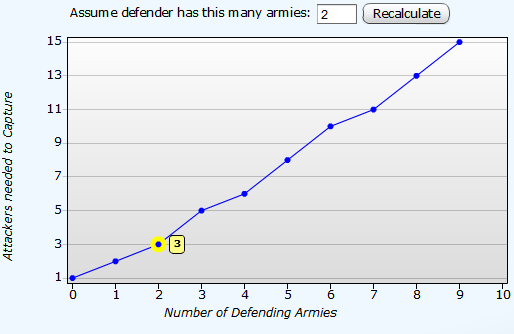 Since there’s no randomness, the graph can know with 100% certainty how many armies are needed to capture a territory defended by a certain number of armies. It simply shows the number of defenders on the horizontal axis and the number of attackers needed on the vertical axis.

You can use this graph to figure out how many armies are needed to capture the territory with how many armies it’s currently defended by. When attacking opponents, it’s also useful to consider how many armies the opponent may add, and how many more you wish to attack with.

In no-luck cyclic move order, the initial order of the cycle is determined by how fast each player plays during their first turn (or during territory distribution if it’s a manual distribution game). Whoever plays fastest will be placed 1st in the first move order, and the second fastest player will be placed 2nd, etc. After the initial order is determined, move order will simply swap back and forth just as it would in cyclic move order.

In order to make this fair, the game will only measure the time from when you begun playing your first turn until when you complete it. When a game begins using this move order, the map is initially hidden and a new window appears with a “begin” button. Clicking begin reveals the map and starts your timer, which will stop when you commit orders or picks. There is also a new setting under the Settings tab that relates to this new window, called the begin dialog that can be used to skip this window if you wish.

To increase transparency, you can also see exactly how quickly each player took their first turn in the Menu -> Players window. This shows how fast they took their turn, and if you hover over that value, it also shows the exact time they began and ended taking it. As a separate column, it also shows the resulting move cycle that was determined based on these times. This highlights another difference between this new move order and the standard cyclic move order: the cycle is known by all players. In standard cyclic move order, it’s up to players to figure out the cycle on their own, but in no-luck cycle, WarLight reveals to all players who will be moving when. To help make it obvious, the game shows exactly who will move on the next turn in the left column: 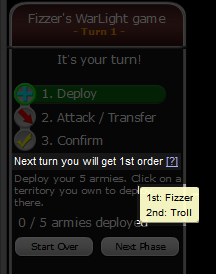 In team games, the average speed of the team will be used to determine the order of the teams in the cycle. Then, within each team, the order is determined by the move speed of each player compared to their teammates.

This isn’t related to this update, but I have news that I’m thrilled to announce about WarLight: WarLight now has an investor! For the first time in its 6-year history, I’m not working on WarLight alone. For the last few months, we’ve been hard at work on WarLight 3.0. More details about this will be coming soon.

– Added simple “fast” and “slow” boot options, aimed at making the boot options easier to configure for first-time players. You can still click “customize” to access the existing functionality.
– Clicking on your name in the top-right now loads your public profile.
– Fixed a bug that caused errors in games that set “bank duration” to 0.
– The “Common Games” page now displays a total letting you know how many games it’s showing, instead of making you count them up.
– Clicking a flashing mail icon now takes you to the last page of the mail thread instead of the first.
– Fixed a bug that made small flag icons say “Plays from null” when hovering over them.
– Fixed a bug on high-resolution screens that made the top red bar stop after 2000 pixels.
– In the lobby, the host-only buttons are now hidden if there’s no host.

Season XVII will use the Strategic Greece template, as voted on by the community. Check out the template with these links: multi-player, single-player 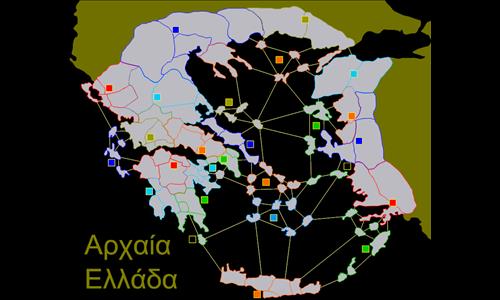