Season XVI’s settings have been voted on by the community in the forum. And the results are in! 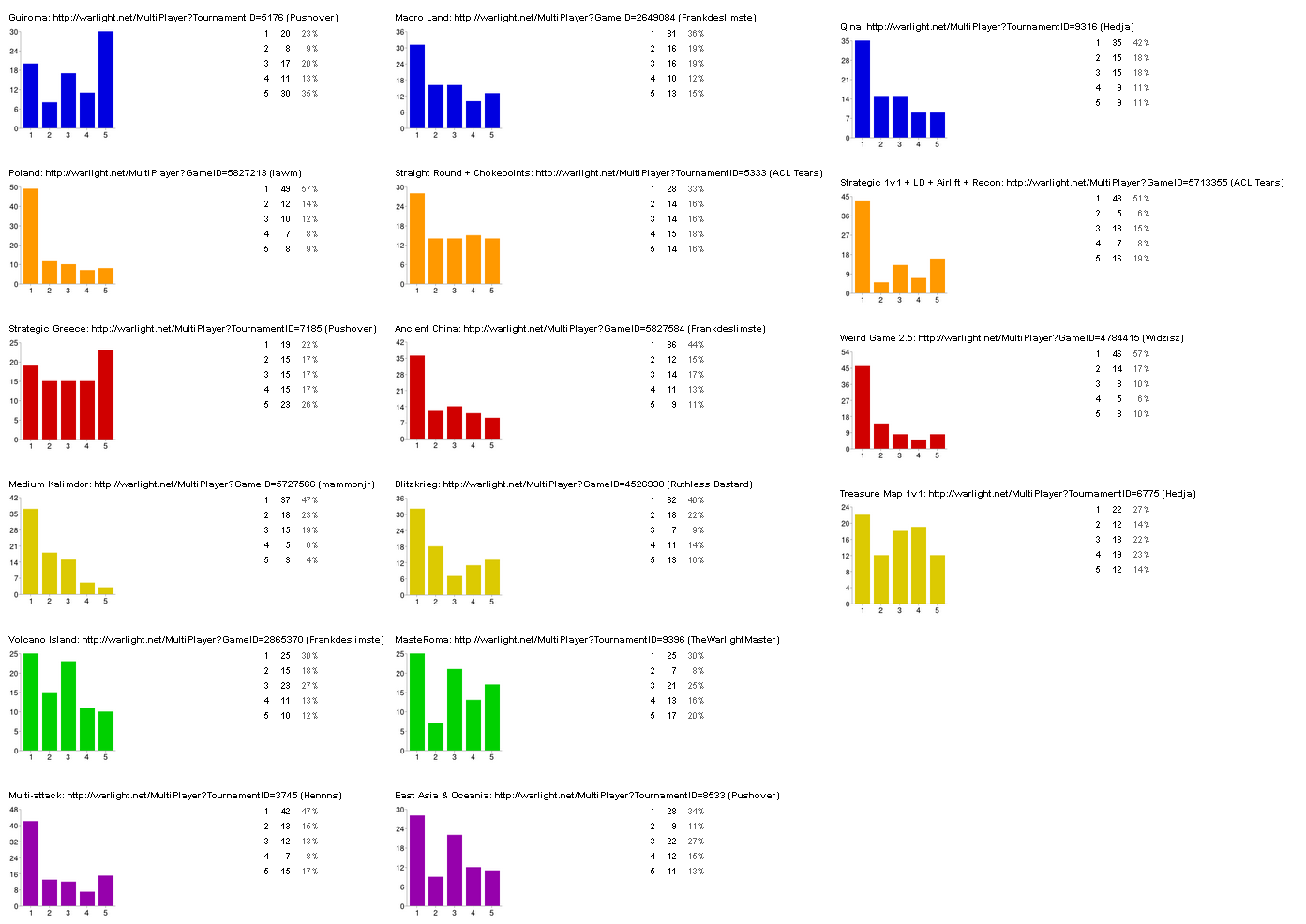 The winner is.. Guiroma! You can check out the template with these links: Multi-Player, Single-Player

The season will begin at midnight on Monday (click to see this time in your local timezone as well as a countdown). Good luck!

WarLight has just been upgraded to version 2.05.1. This update fixes a few bugs and has a couple small enhancements.

WarLight has just been upgraded to version 2.05.0! This update adds a forth ladder to the game, the real-time ladder. It also has a few other enhancements. This blog post describes what’s changed.

In addition to the 1v1, 2v2, and seasonal ladders, WarLight now as a forth ladder: the Real-Time Ladder. It’s named as such since, unlike the other three ladders, games have a 5-minute automatic boot time making them a real-time games instead of a multi-day games. The ladder is immediately available to all members and players level 45 or over.

The way the ladder rates players and matches players also works differently. Read on for the full details.

Joining and leaving the ladder

When you want to play in the real-time ladder, simply visit the ladder page (under Community -> Ladders) and click Join Ladder. Within 5 minutes, if there is a suitable opponent, a game will be created. You can only play in one game at a time. When that game finishes, a new one will be created within 5 minutes, again assuming there’s a suitable opponent. You won’t be matched with the same person more than once in a 20 hour period.

When you’re done playing games, just go back to the ladder page and click Leave Ladder. This won’t remove you from any in-progress games or stop them from counting, it will just stop you from getting new games. Therefore, it’s a good idea to leave the ladder while you’re in the middle of playing the last game you want to play. If you wait until it finishes before leaving, you might accidentally get a new one if you can’t leave fast enough.

If you get booted from a game, it will automatically remove you from the ladder so you don’t get more games. This prevents a runaway boot streak that could happen if you lost internet connectivity, for example. If you accidentally get booted but want to keep playing, just go back to the ladder page and click Join Ladder again.

The settings for each game is determined randomly from a list of templates. This list is initially seeded with some of the seasonal ladder templates, but templates will be added and removed over time based on suggestions from the community.

Unlike the other ladders, ratings will update immediately after a game finishes. After every game, you can refresh your ladder page to see your new rating.

This makes the rating method much simpler than the other ladders. The ripple effect of the other ladders is not present — the rating change is affected only by the rating of your opponent when you played, not their future changes. Also, games never expire like they do in the other ladders, but the TrueSkill algorithm weights newer games more highly, so you still have the ability to move your rating over time.

It takes around 15 completed games to receive a rank. Unlike the other ladders, you get a rank even while you’re not joined to the ladder. If you don’t play a real-time ladder game for 3 days, you’ll lose your rank and revert to “Not Ranked” until you play a game again. This doesn’t affect your rating.

Also unlike the other ladders, the real-time ladder does not award points for ranks. Instead, each win gives 4x the points that the equivalent game would give if you just created it on its own.

A few level rewards were moved around. See the Levels page on the wiki for the new set-up.

If you are already a higher level than a reward that was moved to be a level below you, you’ll receive it at your next level up. If a level reward was moved to a level that’s higher than you, you won’t lose it (once unlocked, it never re-locks.)

Also, since there’s a new level unlockable (the real-time ladder), this shifts the max level with a reward from 52 to 53. This also has the effect of reducing the point totals of all levels above 53. If you’re already above 52, you’ll probably notice a jump in your progress towards the next level. If you were close to getting a level up, you’ll appear as over 100%. In this case, you’ll get a level up the next time you receive any points and the remaining will overflow into the next level.

– In non-multi-attack games, trying to issue an attack order out of a territory that you’re gifting or abandoning now gives a message explaining that it will have no effect.
– Trying to play abandon+gift cards on the same territory, or abandon+airlift cards on the same territory now gives you an error message. This helps new players understand that they can’t combine them.
– The My Games and Open Games pages got some improved colors.
– The My Games paging system has been improved so that all page links are visible even for players with a ton of games.
– The My Games page now pops up a tooltip explaining how to find finished games. It only appears if you’re on the default filter, since if you’ve changed filters you probably already know how to find finished games.
– The boxes on the My Games page now wrap when there are lots of players, ensuring that the “your turn” message is never pushed off the page.
– When the CreateGame API fails due to blacklist, it now tells you who has blacklisted you that’s causing the error.
– The chat windows no longer scroll to the bottom unless it’s already near the bottom. This allows you to scroll up and read chat without it automatically returning you to the bottom whenever someone says something.
– Fixed a bug in the bbcode markup on the forums that made the [list] tag not work properly.
– Fixed a bug that could cause authentication errors when players switched accounts.
– Fixed a bug that left the deployment slider open if you pressed a hotkey to enter history after deploying using the ctrl+click trick.

WarLight is partnering with TheAIGames.com to bring you the WarLight AI Challenge! This allows you to write our own WarLight bot and send it into combat with other people’s bots.

Here’s the basic idea of how it works:

1. Sign up at TheAIGames.com
2. Write an AI bot in C, C#, C++, Go, Java, PHP or Python (if you want to use a different language, please request it.) Your bot will choose what territories it wants to start in, where to deploy armies, and issue attack/transfer orders, just like in WarLight.
3. Upload your bot to your profile at TheAIGames.com
4. Watch your bot match up against other bots in the interactive viewer.
5. If you lose any matches, figure out what your bot could have done better in that situation. You can see a log of the match which you can paste back into your bot, so you can easily debug what you code was doing in any situation.
6. Improve it, and repeat.

Check out all the details TheAIGames.com. Good luck!

WarLight has just been upgraded to version 2.04.0! This update improves the way cyclic move order works, and brings a few other enhancements/fixes to the site.

The way that cyclic move order works has changed with this update. Cyclic move order is a setting that can be enabled for games that determines the order in which orders are carried out (most notably, who gets the first attack on each turn).

Prior to this update, cyclic move order worked by taking the person who got first move on the previous turn and giving them last move on the next turn. For example, if you had four players named A, B, C and D, the order would work like this:

After this update, the order simply swaps:

It’s worth noting that in a 1v1 game, these two methods are identical — the players simply take turns getting first move. However, in games with more than two players, the new method is actually more fair.

Say, for example, say you’re playing in a 4-player FFA, and you’re in a battle with one enemy player. You’re player B fighting mostly against player A. Now look at the four possible move orders in the old method: ABCD -> BCDA -> CDAB -> DABC. In three of the four, A gets a move before B — that isn’t fair! By using the new method, it ensures that first-moves will swap back and forth between any two players.

The Open Games and Open Tournament pages now have a check-box that will allow hiding any games/tournaments that have the word “lottery” in them.

Lottery games are typically games that have no skill involved where the winner is determined randomly. If you don’t like these kind of games, this check-box can be used to hide them so they don’t need to clutter up your page.

The state of this check-box will be saved to your local device so the next time you load the page it will be checked or unchecked as you left it.

– The number of simultaneous open games that a player can have at a time has been raised by one.
– Made the lobby page wider so more of player’s name can be displayed.
– Modified kill rates no longer reduce that game’s point multiplier. If you’re modifying kill rates to make a game that’s purely luck based, please be sure the game has the word “lottery” in the game name.
– Fixed a bug when using the Enter key to send an in-game message that contained territory or bonus links.
– Fixed a bug that caused some numbers on the in-game graph’s vertical axis to be wrong. The data displayed was never wrong, just the axis along the left.
– Fixed a bug that occurred if you opened history to the distribution state, opened the view picks drop down, but then used a hotkey to exit history without closing the drop down.
– Fixed a bug that let you open multiple private chat windows to the same player.
– Fixed a bug that let you open multiple vote-to-end windows.
– Fixed a bug that prevented Facebook users from getting the multi-platform achievements. They will be awarded the next time you sign into the website with your Facebook account.
– When making maps, the length of territory names, distribution names, and bonus names is now limited to 50 characters.
– When adding a scenario distribution to a map, it now links to the wiki for those who don’t know how scenario distributions work.
– Improved the website so it now gives a message when the server is under heavy load instead of just a generic error.
– iOS/Android: The menu button is now disabled while playing cards (cards that require interacting with the map, like recon, abandon, blockade, etc.). Most of the menu options would cause errors or cause the game to crash, so it makes sense to disable it.
– Android: Fixed a bug that sometimes caused the screen to be half black after the software keyboard was closed.
– Android: Fixed layout issues that caused some pages to not be centered.