WarLight will be going down on Wednesday, May 25th at 11pm PDT (6am GMT) for up to 1 hour. Please plan accordingly for any fast games or single player games that may get interrupted during this 1 hour window.

During this time, WarLight will be upgraded to v1.04.0. This blog post contains a summary of what’s changing.

When viewing a player or team’s ladder information, WarLight now shows you a graph of their previous rank and rating: 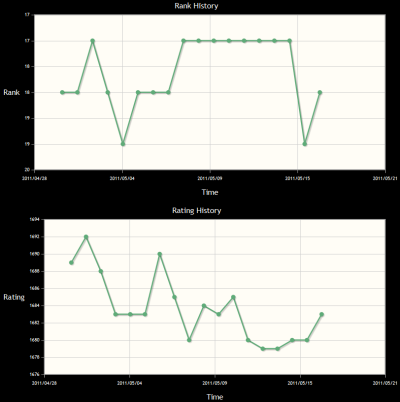 Further, all of the ladder pages now show small arrows that indicate the movement over the past week:

The little speed graphs on the left side of profile pages received a small addition. It’s now split between real-time games and multi-day games. Additionally, the multi-day game graph now has a new section for turns that took longer than a week.

The Gold Stars that you can earn by completing single player levels quickly are also now shown on your profile. 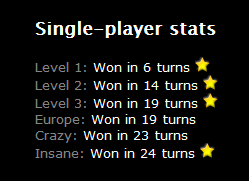 When issuing an attack, you can issue them in raw army numbers or by percentage. A small change is being made to the way that percentage attacks work.

Let’s look at an example. Say you have 21 armies on Brazil and 21 armies on Argentina. Say you transfer 20 armies from Argentina to Brazil, and then attack Nigeria from Brazil with 50%.

The ladder’s matchmaking algorithm has to walk a fine line. If it tries to be too selective in the matches it creates, some people will complain that they aren’t getting as many games as they’d like. Conversely, if it’s less selective, some people complain about who their opponents are. I’m trying to tweak it only in ways that logically make sense, and to make sure I’m not overcorrecting it one way or the other.

The first change being made is that the ladder eligibility requirements now go both ways. Teams or players won’t be matched with someone, even if they meet the requirements, if that other person doesn’t meet the requirements back at them. This is a logical change that will help bring some stability to the matchmaking algorithm.

Since this will cause some people to receive fewer games than before, the ladder range is also being increased to counteract this. The range the ladder looks at has been increased from 25% to 30%.

Even with this increase, I expect some people will have stagnated games in the short-term due to this new requirement. However, as a few more games finish, this will pass and everything should return to the same quantity of games it was at before, but the quality of opponents should be much higher (i.e. fewer repeats and more diversity.)