This game is now 10 years old! It’s been a long journey from where WarLight started: 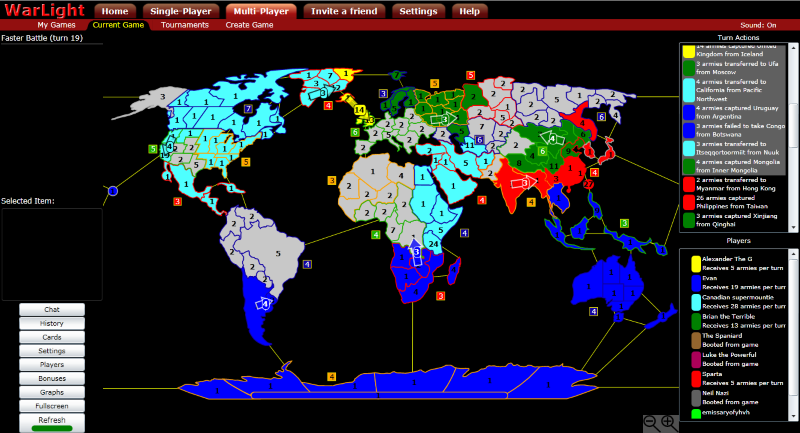 I started this game thinking I’d just play a few games with my friends and move on. I never thought it would turn into what it has today — thanks mostly to the great community! Thanks so much for coming on this journey with me. I look forward to the next 10!

Warzone has just been updated to version 4.06.0! This update brings leaderboards to the Quickmatch system, as well as other fixes and improvements.

The website and standalone versions are updated now. The Android app will be updated within an hour or so. iOS devices will not receive this update.

Here’s the full change log:
– Quickmatch: Added leaderboards. If your global rating is 200 or higher, you’ll now see a “Leaderboards” button appear in the Quickmatch page.
– Quickmatch: Fixed duplicate “country” ratings. Thanks to Timiniator for reporting this.
– Unity: If you issue an attack, then remove all of the armies from the source territory of that attack, then open the attack/transfer dialog again, the text box now defaults to “0” so that selecting Okay will now remove the attack without having to manually type a “0” into the box.
– Unity: Fixed a bug that made changing perspectives in history give an error.
– All: The “Retrieve older messages” button no longer appears on games without any chat.
– All: Updated loading images.
– Website: Improved the tooltips on the Points page. Thanks to EFHIII for reporting this.
– Website: Updated Press page.
– Android/iOS: Fixed a bug that could cause parts of a chat message you’re typing to be lost when using the “enter” key on the software keyboard. Thanks to MGO for reporting this.

Warzone has just been updated to version 4.05.1! This update fixes some bugs, and makes some improvements throughout the app. Basically, this update contains all the fixes and improvements that were reported to me while I was working on UJS over the last month.

Warzone has just been updated to version 4.05.0! This update brings the features of Quickmatch, which was previously only usable through the Unity client, to the website! This means that if you play Warzone through the website in Flash mode, you’ll now have access to Quickmatch.

If you aren’t familiar with Quickmatch, it makes joining multi-player games significantly easier. Instead of having to scroll through a list of open games, joining a game is as easy as clicking one button. It can be used to join both real-time or multi-day games, while still giving you control over what templates you’re willing to play. See the original announcement for more details. 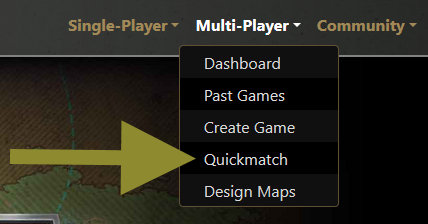 Quickmatch was brought to the website through a new tool I’ve been developing called UJS. UJS’s goal is to bring the entire Warzone Unity app to the website, in a way that isn’t as slow a memory intensive as the currently available method.

The main goal of developing UJS is in response to how slowly the Unity app loads on the website. In my opinion, it’s loading speed and memory usage are unacceptable, and I’m working on fixing that.

Therefore, the magic of today’s update really has nothing to do with Quickmatch. This is a demonstration that the Unity app can run on the website and be quick, even on low-end computers. If this project is successful, the other pages from the Unity app will be run through UJS too. More details about this will be released in the future.