Warzone has just been updated to version 4.10.0! This update adds a new map rendering engine called UJS-Canvas, as well as some bug fixes.

This is a server-only update, which means the Unity app (iOS/Android apps) will not receive this version.

UJS-Canvas is a new map rendering engine for players playing Warzone through a web browser on a computer. It is similar to the UJS mode already available, but it renders the map using the html <canvas> element.

The goal of UJS-Canvas is increased performance on large maps. In UJS mode, large maps can cause a significant amount of framerate lag. UJS-Canvas aims to fix this by redrawing the map only when you pan/zoom around instead of every frame. This leads to a smoother experience, which helps on maps of all sizes but is most noticeable on large maps.

It also has some small visual improvements over UJS mode. For example, when territories bounce, the army number on that territory bounces with them which looks more natural. Also, when territories glow, the glow effect is done much more efficiently than UJS mode which also saves a lot of CPU. This is most noticeable when selecting very large bonuses, such as super bonuses on large maps, which highlight much more smoothly in UJS-Canvas over UJS mode.

You can try it right now! Just head to the Change Web Mode page and check the UJS-Canvas option. If you try it out, let me know what you think!

One year ago today Warzone was born!

We’ve come a long way in the last year. Most of the year was spent on fixing bugs and issues, most notably the UJS client. Thankfully, we did fit some new features in as well with a graphics overhaul, quickmatch leaderboards, tournament byes, tournaments in the mobile app, and continued improvements to the mod system.

I’m happy to report that this game is in the best place it’s ever been. The game is more stable and reliable than ever before, and we can finally say it doesn’t rely on any outdated technologies! (Except map design…) Plus we finally have one UI that runs across all devices (iOS/Android/Web), which we’ve never had before. This means that, going forward, you should expect to see more features and improvements to the game than ever before.

Warzone is not a one-off game like is so common in the games industry, where a company finishes a game and moves on to a new one. Warzone is my full time job and I intend to relentlessly pursue improvements to it for as long as I can. I’d love to continue improving it for the rest of my life, if I can. Over the last two weeks, I’ve been working on something that will make UJS users happy. Stay tuned to the blog for an announcement.

I want to thank everyone in the Warzone community for everything. I don’t say it often enough, but you all rock. Warzone has the best community of any game I’ve been a part of, and you are all a big part of what makes the game awesome.

Last month also set a record for activity. Here’s a graph of the number of multi-player games played per month: 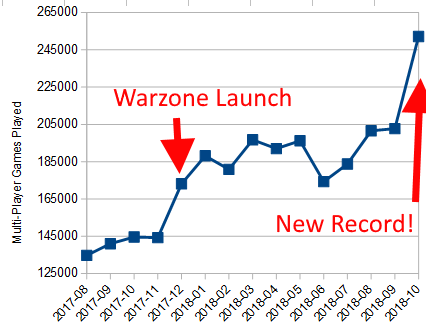 Warzone’s future is bright, and I’m thrilled to go on this journey together!

Warzone has just been updated to version 4.09.3! This update fixes several bugs and makes some tweaks to tournaments. This blog post describes what’s changed.

This a server-only update (meaning the Unity client + apps won’t receive this version).