WarLight has just been upgraded to version 2.07.0! This update makes no-split mode available for non-ladder games, and makes improvements to the banking boot times system.

No-split mode is now available as a reward at level 39. If you’re already over 39, you’ll get access to it on your next level up. See the previous blog post for an explanation of what no-split mode is.

Just like any time a level reward is added, this causes the number of points to achieve each level to be adjusted, usually shrinking them. Therefore, you may notice your progress in your current level going up automatically at the time of this update. If you were near the next level, you could even wind up a situation where your progress bar shows as being over 100%. In this case, you’ll simply get a level up the next time you receive any points. Any extra points will be automatically rolled over into the next level, so nobody gained or lost points with this update.

With this update, boot times are now much more flexible!

Banking boot times is a feature that lets you “bank” time that you didn’t spend. For example, in a 5-minute boot game, if you take your turn in 4 minutes you are eligible to bank up to 1 minute (the actual amount can vary based on the game’s configuration.) This banked time can then be used to exceed the boot time in subsequent turns. In this example, you could go up to 6 minutes the next turn before you’d become bootable.

With this update, two new fields are added that increase the flexibility of this feature.

First, game creators can now grant free banked time at the start of the game. For example, in a 2 minute boot game, all players could start with 10 minutes pre-banked. This would give them 10 minutes additional time they could spend over the boot limit.

Second, game creators can now control when banked time expires, in number of turns. For example, if you bank a minute on turn 1, and don’t use it by turn 11, it would expire. This limit exists to prevent someone from acquiring too much banked time. Prior to this update, when banking boot times were enabled, this number was always 10. Now, game creators can set it to anything from 0 to 200.

These two new fields allows a lot of flexibility in controlling boot times. Let’s start with a fairly typical example.

Boot time of 2 minutes, Bank 50%, no initial bank, bank duration of 3: You always have at least 2 minutes to take your turn. If you take your first turn in 1.5 minutes, you’d bank 50% of the 30 seconds difference, or 15 seconds. Therefore, your second turn would give you 2 minutes and 15 seconds before you’re bootable. If you take 2 minutes and 10 seconds to take your turn, you’d eat up 10 seconds of your bank and be left with 5 seconds in your bank, giving you 2 minutes and 5 seconds for your third turn. If you take your third turn in 30 seconds, you’d bank 50% of the 1 minute 30 second difference, adding 45 seconds to your existing bank of 5 seconds giving you a bank of 50 seconds. For your forth turn, you take exactly two minutes, which doesn’t adds or subtract any time from your bank. However, since the bank duration is only 3 turns, the 15 seconds earned in the first turn expire, reducing your bank to 35 seconds, or a total boot time of 2 minutes and 35 seconds.

Boot time of 12 hours, Bank 50%, 12 hours initial bank, bank duration of 20: You always have 12 hours to take your turn. However, because all players start with 12 hours already in their bank, the first turn boot time actually becomes 24 hours. Let’s say you take your first turn in 14 hours. This eats up 2 hours out of your bank, and gives you 22 hours to make your second turn. You take your second turn quickly, after only 2 hours. You bank 50% of the 10 hour difference, adding 5 hours to your existing bank of 10, which means you have 27 hours to make your third turn. If the game made it all the way to turn 10, the initial 12 hours would expire leaving only the time earned in the last 20 turns in the bank.

Let’s look at how we could use this to address a common request, adding additional time for the game’s first turn:

Boot time of 5 minutes, Bank 0%, 10 minutes initial bank, bank duration of 1: In this case, the 0% banking percentage means there’s no way to add to your bank. The initial bank is the only amount that applies. Therefore, the first turn gives you 15 minutes, and all subsequent turns give just 5. If this is a manual distribution game, those 15 minutes would apply to the territory selection step, otherwise they’d apply to the first turn of the normal game.

Just like before, you can always view how much time anyone has banked by visiting the Nudge/Boot panel and clicking the “speed” link next to any player’s name. Note that the bank amounts will differ for vote to boot, direct boot, and auto boot, if they’re set to different times.

There’s also a change to the way the clock works in real-time games when banking boot is enabled. After committing your orders, the clock shows how much time you have banked. In games without banking boot times, the clock continues counting down so you know how much time other players have. However, this doesn’t work in banking boot games since all players could become bootable at different times.

Let me know what you think of the new boot time flexibility! I’d like to find ways to make the boot timer more flexible, as long as it’s easy for new players to understand.

– Fixed a bug that could let team Round Robin tournaments create more games for a team at a time than the limit.
– Added optional e-mail validation.

Congrats to JV for winning Season XV with a very impressive 18-2 record!

No-split mode is simple. In games where it is enabled, all attack/transfer orders must use every army available. When issuing an attack or transfer, there won’t even be a slider available to choose the number of armies: 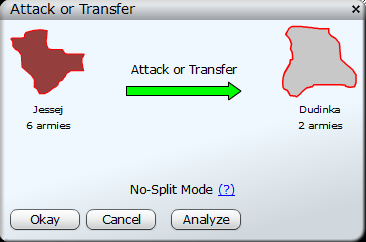 In other words, if you have a big stack of armies, it isn’t possible to split that stack into smaller stacks. They must stay together forever. This changes the game’s strategy quite a bit, since you need to be conscious of when you want to combine armies onto the same territory.

The settings are similar to Strategic 1v1, except on the Modified Medium Earth map and of course, no-split mode. The template was can be viewed using these links, but you can’t play it with no-split mode yet since that setting is exclusive to the seasonal ladder (for now): Multi-Player, Single-Player