I’m working on a new theme for Warzone. Here’s a sneak peek at what it might look like. In all of these screenshots, the current theme is on the left, and the new dark theme of the same page is on the right.

In addition to just changing colors, I’m also trying to fix how the app looks on small devices. The most difficult configuration to support is the 2.5 inch wide smartphone being held in portrait mode. Some of Warzone’s pages look very bad in this configuration, such as those that list games/tournaments/templates. Here’s an example of how these terrible looking pages are becoming not-so-terrible with this new theme: 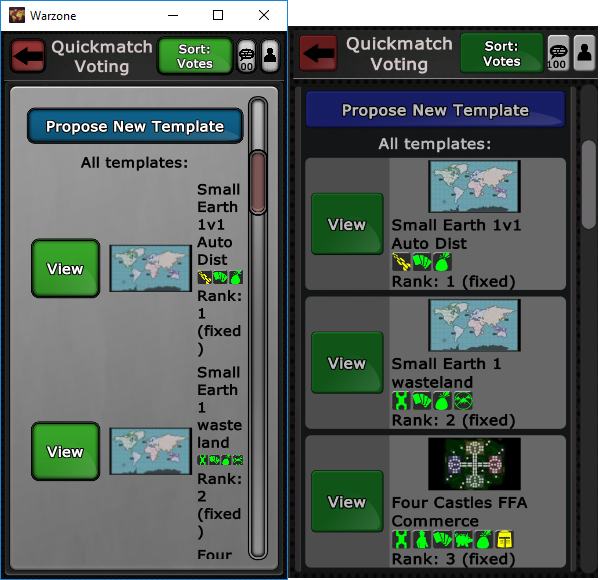 I’m also looking at fixing up some areas that are hard to read, such as the Ladders section on profiles:

Let me know what you think!

Warzone has just been updated to version 4.13.0! This update takes a first step towards the eventual goal at decreasing the amount of time it takes to complete real-time games. This blog post describes what’s changed.

Starting with this update, the Warzone server now stores orders as you’re entering them in multi-player games. Previously, these orders would stay on the client until you pressed the Commit button, at which point all of your orders were sent to the server.

By sending orders to the server more often, this offers a few advantages:

Prior to this update, failing to press the Commit button before the timer hit 0 in an auto-boot game would result in you getting booted and losing the entire game. Now, with this update, Warzone will simply use the orders you’ve entered so far as your set of orders for the game and continue it as if you had pressed Commit.

This makes the booter much more forgiving and allows you to continue to try and salvage a game where you would have otherwise been granted an instant-loss. Auto commit is a necessary prerequisite for games with faster boot times. Once this update is fully deployed, we’ll start to reduce boot times on some real-time templates to experiment with making real-time games faster.

Prior to this update, you could only view orders entered by your teammate after they commit them. Now, you’ll be able to view your teammate orders as soon as they enter them.

This greatly eases the collaboration in real-time team games. When your teammate deploys or attacks, the armies+arrows will show up immediately on your map so you can see what they’re doing.
If they play a card, it will show as “Played” immediately so you know not to use it, alleviating the need to call out “I’m using the card” in chat.

Resume your turn across devices

If you enter orders for a multi-player game on one device, you’ll be able to view or commit those orders on another device. Prior to this update, this was only possible if you were on the same device or if you committed your orders.

When a multi-day game ends, players in it who have push notifications enabled will receive a notification letting them know whether they won or lost.

Push notifications are also now sent leading up to the start of real-time tournaments you joined, giving you plenty of reminders so you’re ready for it.

Your blacklist is now known as your block list. Its functionality has not changed, just the name. While the term blacklist has never meant to refer to skin color, we want to make sure that new players don’t think that it might.

– Unity/UJS: Fixed the turn number displayed in the top left corner when watching turns. It displays one number lower than it did before. Thanks to the person who reported this on twitch.
– Unity/UJS: Fixed a bug with mods that change territory ownership before deployments happen that would cause an error if someone deployed on a territory that they ended up not owning when the deploy order executed.
– All: Sped up the animation speed slightly when watching turns play out.
– All: Added a pop-up message the first time a new player opens Quickmatch that explains how it works.
– All: Players below level 10 can no longer create private mail threads.
– All: The surrender tutorial no longer requires watching an ad to play. Thanks to dannyB for reporting this.
– All: Fixed an issue with FFA coin tournaments that caused the second place prize to be wasted if it didn’t divide evenly. It now gives the left over coins to first place. Thanks to Wayne for reporting this.
– All: Fixed some issues to improve the reliability of 1v1, 2v2, and 3v3 ladder.
– UJS: Fixed a bug that could cause alerts to close right after opening. Thanks to TBest for figuring out how to reproduce this.
– Website: Separated Wiki and FAQ into separate items under the Help menu.
– Website: Fixed a bug with surrender tutorial and Facebook login. Thanks to Syphen for reporting this.