For the next two weeks, WarLight is accepting applications for players who want to help test the WarLight app for iPhone or iPod touch.

The app isn’t done, however it works well enough to take your turn in multi-player games. For a full list of of the features that aren’t implemented yet, see Mobile Client on the wiki.

Due to Apple’s restrictions, the number of players that can be accepted is very limited. Only WarLight members may apply.

Click here to apply. (EDIT: Link taken down, thanks to everyone who applied). This link will stay up until May 7th.

This app does work on iPads, however the focus of this release is to test iPhones and iPod touches. If you want to apply with your iPad, you may do. However, iPhones will get priority, and iPad users will only be chosen if there’s space left over.

Let me know if you have any questions. Thanks!

WarLight was just upgraded to version 1.12.2.

To further improve the work done in the previous release, the way that the attack/transfer dialog detects double-clicks has been tweaked again. Double-clicking to attack with all armies should work more reliably now, especially when issuing attacks near the top of the screen.

Let me know if this works better or worse than before!

Due to some strange issue, a change I made to the WarLight preloader in the previous release caused the filesize to jump from 1.7mb to 2.4mb.

I reverted the preloader change in this release, so this should bring the size back down and speed up the loading time of the Flash file.

WarLight was just updated to version 1.12.1. This release contains a bunch of small improvements and minor bug fixes.

When issuing attacks, WarLight now registers clicks on the arrow itself instead of just the destination territory. 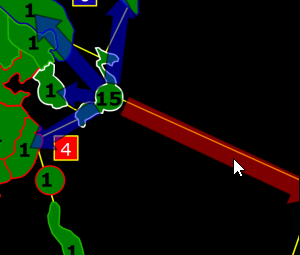 This makes it easier to issue attacks that wrap around the map when zoomed in. Note that this only works when the arrow is over water — clicking a territory always has precedence over clicking an arrow.

The way that the attack/transfer dialog positions itself has been changed so that it never appears in a location that will be off the screen.

The reason it appeared off-screen is because it made sure it always positioned itself so that your mouse cursor was over the “Okay” button. This allows for simply double-clicking when you want to attack with all available armies, which is what you want to do most of the time. This is my favorite kind of UI paradigm since it requires no training. There’s no text in WarLight telling players that they can double-click to attack with all armies, it’s just something players intuitively pick up once they realize their cursor always starts over the “Okay” button. 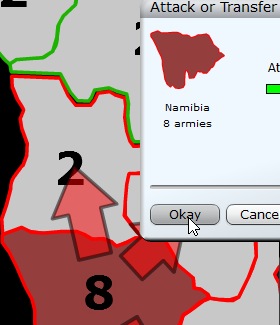 This release contains an experimental system to both keep the dialog on the screen and also make sure that the double-click feature continues to work. The dialog now contains three invisible hot-spots in the corners. Clicking any of these spots is the equivalent to clicking the “Okay” button. They’re show as blue circles in this image: 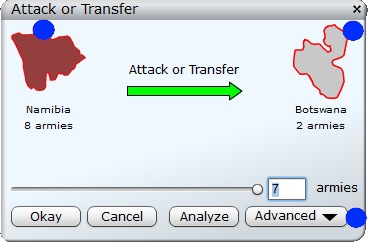 WarLight tries to open this dialog with your cursor over the Okay button, but if it isn’t possible it will open it so your cursor is directly centered in one of these hot spots. This ensures that double-clicking still attacks as normal, but it also allows the dialog to always appear on the screen.

Let me know what you think of this!

Players can now only be nudged if they haven’t taken their turn in a game for 24 hours, instead of the old value of 30 minutes. This means players that play their turns once every 24 hours won’t be able to be nudged at all.

When nudging was introduced way back in 2008, WarLight didn’t differentiate between multi-day and real-time games. Therefore, a nudge duration of 30 minutes was chosen as a compromise between fast games and slow games. This decision ended up not working for either format, since 30 minutes is way too long for a real-time game and far too short for a multi-day game.

Nudge, in its current implementation, doesn’t really work in real-time games at all since players aren’t checking their e-mail. At some point, I’d like to make nudge work differently, such as putting a message on the My Games page or playing a unique sound.

– Map pages now place the map’s name in the page’s title.
– Added an explanation to the history dialog to help new players understand it.
– Clicking on the seasonal ladder from the Dashboard now takes you to that season instead of the list of seasons.
– Minor text changes were made on the map page. Removed the text “so far” after “x players found this review helpful” and changed “First went public on” to “Went public on”
– Fixed a bug that was preventing the Flash file from being resized down too small vertically.
– Fixed a bug that broke the question-mark link next to a game creator’s Personal Message.
– Fixed a bug in the map designer that caused bonuses to sometimes become unclickable.
– Fixed a bug that in rare cases caused the deployment slider to not close when a game ended.

Congrats to PaniX on winning Season II! It really came right down to the wire, but PaniX pulled into the lead at the last second. Nice work on a 17-3 season! 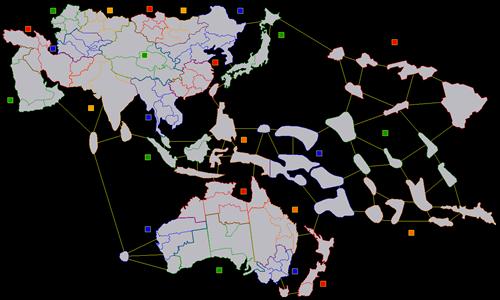 One of the biggest fundamental differences from Medium Earth is that this map doesn’t wrap around the sides. That means the map effectively has a middle, sides, and corners. Even though it has 8 fewer territories than Medium Earth, this can make it feel larger.

Season III will begin this Friday, April 13th, at midnight GMT. If you were part of Season II, you’re automatically signed up for Season III. If you left Season II, you’ll need to re-join the seasonal ladder to take part in Season III.

You can use this template to see the exact settings: multi-player, single-player.