Warzone has just been updated to version 5.20.1! This blog post describes what’s changed.

This update is live now on the website at warzone.com, as well as the standalone apps. The iOS/Android apps will receive this update in the coming weeks. 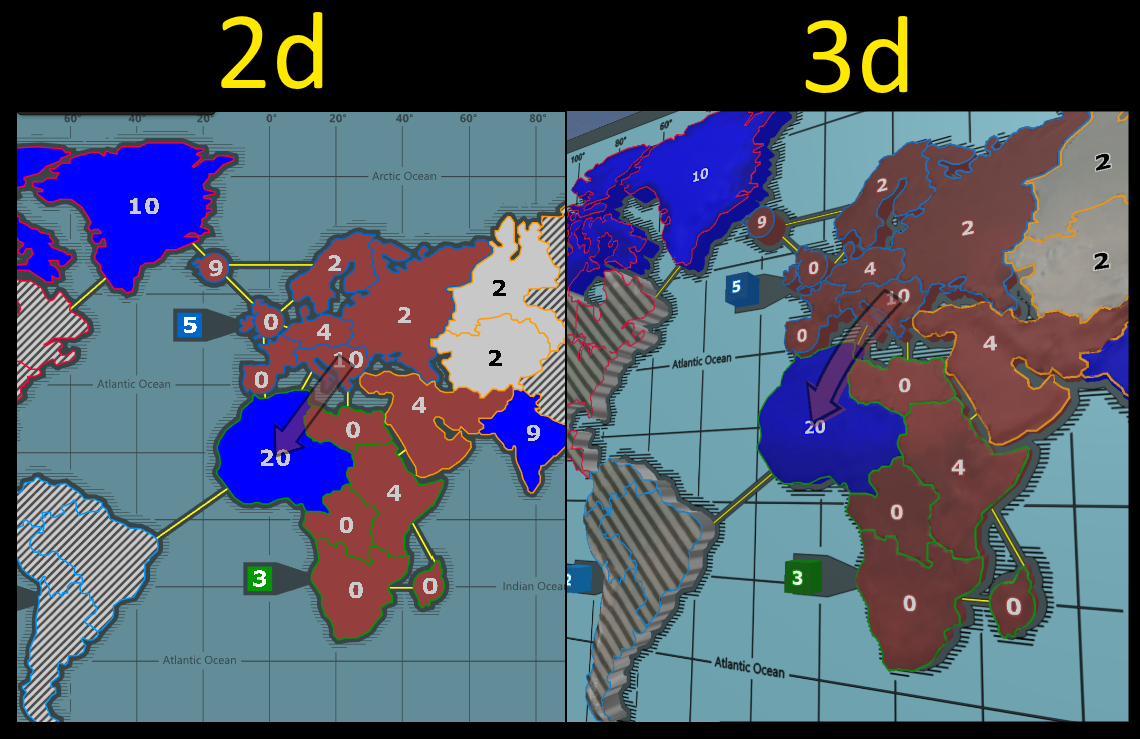 – All: The list of players to choose for the destination of private chat is now sorted.
– Unity: Added free camera option to map preview.
– Unity: Fixed hit detection on 3d maps.
– Unity: Fixed 3d map objects with cut-outs sometimes not rendering the cut-outs.
– Unity: Fixed bonus links not appearing for newly added bonuses in the map designer.
– Unity: Fixed the top right menu and game menu from being too small on high-scaled screens.
– Mods: Fixed a bug that caused an error if a mod played a spy card between teammates.
– Website: Fixed not being able to enter negative overridden bonuses.

Warzone has just been updated to version 5.20.0! This blog post describes what’s changed.

This update is live now on the website at warzone.com, as well as the standalone apps. The iOS/Android apps will not receive this version and instead will get these features when 5.20.1 is released.

In this first preview, 3d maps are only available to member map makers. You can access it in the Standalone Client. In a future update, it will become possible to use 3d maps in the normal game, too, but for now it’s only possible in the map designer.

No special actions will need to be taken by map designers to make their maps 3d, and all maps will support 3d mode. However, there are a few additional features that map makers can apply to make their maps look more stunning in 3d mode, such as heightmaps and textures. Details about these can be found on the Warzone wiki.

Map Designer to the App

The Map Designer, used to make new maps, is now available in the Unity app! Previously, map design was only possible on the website, but now it will be on all platforms which means it will be possible to make maps entirely on iOS/Android!

If map development is enabled on your account (as is done through the wiki), you can find it by clicking the top right button and selecting the new Map Development option.

Mega Games, the feature that was released in 5.18, has now had its limit increased! That means that Warzone Classic games can now support up to a whopping 300 players! You must be running version 5.20.0 or newer to create the games, but anyone running 5.18.0 or higher can join and play them without any issues.

– Idle: Added settings to disable the popups for unclaimed powers, mortars, arenas, and dig sites.
– Idle: Added Inspire Mercenaries powers to the possible options for daily rewards.
– Idle: Advanced Auto Conquer will now always conquer free territories first before conquering any others.
– Idle: A skip level power will no longer mark the last level as skipped, since there’s nothing after it to unlock so it would be a waste.
– Idle: Fixed auto dig so that it can activate a dig even when the app is closed, up to your max idle limit.
– Idle: Fixed arenas sometimes giving the reward for a different arena than then one you clicked Play on.
– Idle: Fixed territories that were visible through an advancement not counting as visible to some features, such as the Level Stats Dialog and mortar targets.
– Idle: Fixed the modifier breakdown for ore production when ad-watch bonus is active.
– Idle: Fixed assets, such as smelters, not appearing in your list if you conquered them on the last territory of the map.
– Idle: Fixed the “Next victory is worth” number so it subtracts AP cannibalized from a previous aborted attempt at that level.
– Idle: Fixed a bug that made it so you couldn’t join battles if you only had Advanced Auto Conquer and not normal Auto Conquer.
– Idle: Fixed the mortar dialog so it shows the correct increased percentage if you’ve unlocked the Increased Mortar Damage advancement.
– Idle: Fixed a bug that made mortars continue to glow even after firing and missing.
– Unity: Tabs are no longer marked as experimental.
– Unity: Fixed tournament bracket view so it doesn’t go to the bottom right corner on initial load.
– Classic: When you win a multi-player 1v1 game, the end game dialog now tries to explain why you won, such as “your opponent was booted for running out of time”. This helps newbies understand why a game ended.
– Classic: Slightly increased match rate of real-time quickmatch games.
– Classic: The “turns into AI” options can now be used in coin games.
– Classic: Fixed a bug that could allow quickmatch to make a game with fewer coins than your MinCoins parameter.
– Classic: Fixed a bug when creating a game that made the fixed reinforcement card settings box be disabled when first loading the page.
– Website: Fixed the letter “A” representing an AI player from being outside its box.
– Mods: Added the ability to set territories to pickable during territory picking.
– Mods: Added field TerritoryModification.AddArmies, TerritoryModification.AddStructuresOpt, and GameOrderEvent.AddResourceOpt. These let you add/remove things instead of setting them. This is preferable over setting for reducing conflicts between different mods.
– Mods: Added GameOrderEvent.AddCardPiecesOpt and GameOrderEvent.RemoveWholeCardsOpt so that mods can now add/remove cards at will.
– Mods: Fixed NumberInputField from accepting letters in UJS.
– Mods: Fixed dialog not closing when close() is called in Client_PresentMenuUI.
– Mods: Fixed DateTimes in UJS so they return milliseconds to be consistent with other platforms.
– Mods: Fixed a bug with mods that add commanders into a game that wasn’t configured to start with commanders that made things not re-fog properly when a commander dies. This also manifested in errors in some cases like one that said “Can’t attack yourself”