WarLight will be going down for maintenance tonight (Tuesday, September 27th) at midnight PDT (7am GMT). This deployment will involve a little more downtime than usual, but if all goes well, it should be down for less than 1 hour, but the site may be sluggish for a few hours after that as a few migration scripts need to run. Please plan accordingly for any fast games or single player games that may get interrupted during this time.

During the downtime, you can visit the Server Status page on the wiki for up-to-date information about the status of the maintenance.

During this time, WarLight will be upgraded to 1.07.2. This blog post contains a summary of what’s changing. 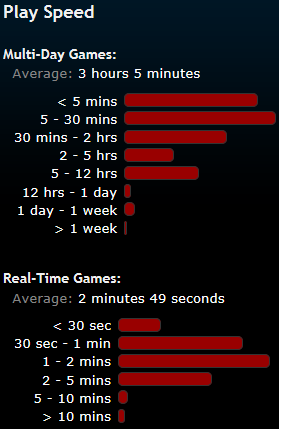 As shown in this image, WarLight now tracks the average play speed of each player separately between multi-day games and real-time games. This is helpful for players who play real-time games, as they can now see how fast a player tends to play those games.

Further, players can use open seat prerequisites to filter down players based on their real-time speed. For example, game creators could prevent anyone from joining their open seats who takes, on average, more than 4 minutes to play their turns in real-time games.

Note that it may be a few hours after the update goes live before the numbers displayed on profiles are accurate.

As previously announced, players now start with 4 armies per territory instead of 5 in the 1v1 ladder. This change only takes effect for new games created after 1.07.2 is live – existing games will not be modified.

– Fixed bugs around the “Inactive for” field that appears on player’s profiles. Previously, it could sometimes show a player as active when, in reality, they really never came to the site. For example, if a player was booted from a game, it reset their “inactive for” back to 0. Now it only resets when a player actually commits orders or sends territory picks.
– Fixed a bug that caused an error if a player joined an open seat, left the game, and then re-joined the same open seat again.
– Lots of performance improvements that will help the site respond faster.

WarLight will be upgraded tonight to version 1.07.1. This update doesn’t have any new features, but it contains a lot of bug fixes and performance/scalability improvements.

This deployment will involve a little more downtime than usual. WarLight will be going down tonight (Saturday, September 24th) at midnight PDT (7am GMT). If all goes well, it should be down for less than 45 minutes. Please plan accordingly for any fast games or single player games that may get interrupted during this time.

During the downtime, you can visit the Server Status page on the wiki for up-to-date information about the status of the WarLight server.

I previously said that the 1v1 ladder setting change would be in 1.07.1. However, since this release will require a little more downtime than usual, I wanted to do it on a weekend since fewer people play on weekends. Therefore, the 1v1 ladder change is being pushed back to 1.07.2. But don’t worry, 1.07.2 should be along soon.

The main motivation behind these performance and scalability improvements is to get WarLight’s cost down. A few weeks ago the WarLight database outgrew its hardware, so it needed to be upgraded to a beefier machine. Since WarLight uses cloud hosting, it’s easy to upgrade and downgrade the server, however the higher monthly bill is killing me. In this release, WarLight’s chat system is being internally de-coupled from the game system, which should reduce the number of transaction conflicts. Not only will this increase the speed of the site in some cases, but hopefully it will reduce the hardware costs as well. This schema change is also the reason for the extended downtime.

The results from the recent vote are in! The vote was about whether or not the 1v1 ladder should start players with 5 armies on each of their territories or 4.

75% versus 14% is pretty overwhelming, so the measure passes! As is convention, all changes to ladder settings are announced on the blog at least a week before they take effect, so this change will be included in the upcoming release 1.07.1 hopefully next week.

This change may seem minor, as it’s only a 3 army difference, but it’s important as it makes it more difficult to capture bonuses on the very first turn. I’m confident this will be a good change going forward. But beware: any time there’s a change in the settings it’s important to remember it requires an adjustment in strategy. Some of the early-game strategies you’re used to may not work like they did before.

This will only affect games that start after 1.07.1 is live. Since this is a change to the Strategic 1 v 1 template, this will also affect the 1v1 auto games. If this bothers you, remember you can always easily create your own 1v1 games using the old settings.

It’s a good idea to get some practice in before your first ladder game with the new settings! You can use these templates: Multi-player / single-player.

There will be another poll soon about changing this in the 2v2 ladder. Stay tuned to the forum.

WarLight will be going down on Sunday, September 18th at 5am PDT (12pm GMT) to add new features. If all goes well, it should only be down for about 20 minutes. Please plan accordingly for any fast games or single player games that may get interrupted during this time.

During this time, WarLight will be upgraded to v1.07.0. This blog post contains a summary of what’s changing.

Single-player games can now be saved and resumed! To do this, visit the Saved Games sub-tab under the Single Player main tab.

When you save a game for the first time, WarLight will ask if you if you want to enable auto-save. If you disable auto-save, it will work like most single-player games do in that you can save a game, try a few things, and then load the game back to an earlier turn.

If you enable auto-save, the game will automatically overwrite the last save each time you take a turn. This means you cannot re-load back to an earlier turn. In order for a win of one of the six built-in levels to count, you must enable auto-save. This means that without auto-save, wins won’t award gold stars, appear on your profile, or lower the turn times showed on the single player tab.

Saved games are saved onto your local computer, not the server, so you must resume each game on the same computer as you started it.

Window Animations can be Disabled

By visiting the Settings tab, players can disable the small “flip up” animation that were added in 1.06. After disabling it, the windows will appear instantly.

WarLight has just been upgraded to 1.06.1. This was a client update only, so it did not require any downtime. If you’re the kind of person who leaves WarLight open all the time, you will need to refresh your browser to pick up the changes.

I’m taking a break from working on the mobile version of WarLight to bring a few updates to the main site.

WarLight will be going down on Monday, September 5th at 3am PDT (10am GMT) to add new features. If all goes well, it should only be down for about 20 minutes. Please plan accordingly for any fast games or single player games that may get interrupted during this time.

During this time, WarLight will be upgraded to v1.06.0. This release is a bit of a grab-bag of a bunch of small features that have been neglected over the years. This blog post contains a summary of what’s changing.

Many areas of the site are receiving facelifts and animations. Polish has traditionally always taken a backseat to features throughout WarLight’s development, so it’s good to finally give it some effort. I won’t spoil the surprise by posting screenshots here, but it’s safe to assume that you will be pleased!

The right column of the main game screen that houses the orders list and players summary can now be hidden when it’s not needed. This is primarily designed for players who play on low-resolution screens, such as netbooks. By collapsing it, it frees up more screen real-estate that can be used to display the main map.

The help tab has been replaced by links to the WarLight Wiki. The wiki will now serve as the primary way of delivering information about the game.

All of the old help content is gone, and any links to the old content will redirect to the correct wiki page, since I hate creating broken links. Further, many more areas within the game itself now provide links to the wiki, such as next to each game setting and each card.

Big thanks to Grzechooo for helping out with the wiki!

Vacations now expire one hour after playing in a game instead of immediately. This helps the situation where a player has several games where they are over the boot time when returning from a vacation, especially when some of those games have auto-boot enabled.

The rule of thumb when coming off of a vacation is to ensure players take all of their turns where they’re over the boot time within an hour of each other. By doing this, they won’t become bootable in any of them.

– The “Advance by one” button was replaced by << and >> buttons that allow for navigating backwards. Players can also use the arrow keys here like they always could in history.
– With the chat window open, holding the Control or Shift keys while clicking on a bonus link now inserts its name into the chat or team chat windows, just like how territories work.
– Each territory and bonus now has a link to Wikipedia under the “More Info” button. This helps those of us who like learning more about the areas we’re conquering.
– After surrendering in a single-player game, the AIs are now significantly faster at finishing the game out.
– The manage-invite-list page now shows when players are on vacation.
– When searching maps, pressing enter after typing a filter now clicks the Apply button.
– The invite limit for tournaments has been raised from 3 times the tournament size to 5 times.
– Renamed the “Select all” button to “Show all”
– Changed the “Team Game” check-box into a drop-down.
– Ladder games now show “expires in X days” if they’re within 10 days of expiring.
– Players in a ladder with 1 game-at-a-time now get automatically bumped up to 2 if they fall under 30 unexpired games.
– Games in the 2v2 now ladder now expire after 5 months instead of 3. Already-expired games won’t un-expire; just new ones won’t expire until they’re 5 months old.