The WarLight wiki is now live! This wiki will become the ultimate source of information for WarLight players.

In true wiki fashion, anybody can edit any page on the wiki – you don’t even need to make an account. This is where you come in – anyone who loves WarLight is encouraged to help build out the information provided here.

Any contributions are appreciated, both large and small. Pick your favorite feature and write up how it works, fill in missing pages (red links), or even just make grammar improvements to the existing pages – every little bit helps!

In a future release, the information on the Help tab will be removed and it will just link to the wiki. Going forward, the wiki will be the one-stop-shop for WarLight information.

WarLight is such a weird brilliant secret. Half the game [journalists] I know are addicted, yet we all write about, like, Duke Nuke’m.

Thanks, Chris! And check out his WarLight review: WarLight is Facebook for sociopaths.

WarLight will be going down on Friday, July 1st at 6am PDT (1pm GMT) to add new features. If all goes well, it should only be down for about 20 minutes. Please plan accordingly for any fast games or single player games that may get interrupted during this time.

During this time, WarLight will be upgraded to v1.05.0. This blog post contains a summary of what’s changing.

WarLight will let you mark yourself as “on vacation.” This feature helps players avoid getting booted in times when they’re going to be away from WarLight for a while.

Simply visit the Settings tab right before you leave on vacation and turn on Vacation Mode. While in this mode, WarLight will display a small “V” next to your name to let other players know you’re on vacation. It will also prevent you from being booted from most games. Note, however, that game creators have the option of disabling vacations in their game. In these games, you’ll still be bootable, so be sure to check the game settings.

Further, vacations aren’t honored in real-time games either. Real-time games are meant to be played in a single sitting, so going on vacation doesn’t really make sense.

In order to support vacations, the auto-booter had to be improved to be smarter about when to check games for bootability. As a result of this improvement, it also made it possible to support auto-boot in conjunction with banking boot times. This are two features which previously could not be combined – now they can!

The website now shows (Expired) next to games that are more than 3 months old. This makes it easier to see which games are affecting your rating. 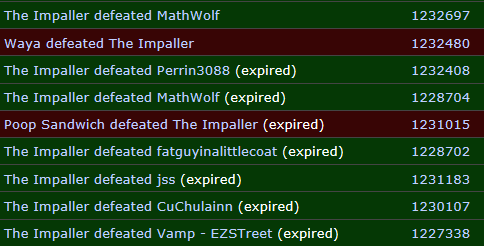 As mentioned in the previous blog post, this release contains code to support the upcoming iPhone and Android versions of WarLight. Stay tuned for the preview!

– The website recieved some style updates.
– When using the Control+Click deploy method, starting to issue an attack now closes the deployment slider.
– When your teammates change orders, the game no longer shows the wait dialog.
– Fixed a bug that caused failed attacks to show the wrong attacking armies if you watched the attack, then navigated back and re-watched the same attack immediately after.
– The lobby now shows a string indicating your state in a game.
– Maps are now served up from a CDN so they download faster.