WarLight has just been updated to version 1.15.2! This is a small update to fix a few bugs from the previous update. This blog post describes what’s changed.

– Optimized the My Games query a bit.
– Added double-click support to the create-game pages that ask about choosing templates.
– Changed the team controls from a drop-down to radio buttons.
– Added rounded corners to the dashboard page.
– Improved the display of forum threads when viewed on iPhones.
– Fixed a bug that could cause an error when sorting the forwarding tournament invites page.
– Fixed the report bug page for players using Opera.
– Fixed a bug that could cause an error when a host changes players on a team game with open seats.
– Fixed a bug that occurred if you tried to copy a game’s settings that used random teams.
– Fixed the error message that came up if a non-member map creator attempted to add more than 24 players to a game on a map they made.
– Fixed a bug that was causing several of the setting-highlights to default off for new players.
– Fixed a bunch of other various small bugs in the new game creation screens.

Prior to the last update, it was possible for non-members to change the boot times, practice game setting, and private messaging setting but still refrain from customizing one of the built-in templates. This allowed them to use the 16% luck values of the Strategic 1v1 and 2v2 templates but still set their own boot times.

Now there’s a temporary work-around in place that allows non-members to set these settings and still use 16% luck. To do this, follow these steps precisely:

This is a temporary work-around. In the future, there will be a better solution to this.

Facebook will never be required to play WarLight. This is just offered as an option for those who prefer it. You will always be able to sign in with an e-mail address as you have been able to up until now.

The main motivation behind allowing this is for the mobile client. Signing in with Facebook is only a small convenience on the website, but trying to type in an e-mail address and password on a phone is much more annoying. Therefore, it’s nice to give players another option.

The Dashboard page, instead of showing all forum posts, will now only show forum posts that have been marked as notable by a moderator.

If you want to see all forum posts, you can still click the Forum sub-tab and everything will behave as it did before. However, the Dashboard now provides a way for players that only casually read the forum to get the highlights without having to wade through the fluff.

Moderators will choose forum posts that are interesting, funny, or they just think that the WarLight community will generally be interested in.

I’m not going to pretend that this is a perfect solution to all of the problems that the forum faces, however it’s a step in the right direction. It’s likely that the forum will see further improvements in the future.

A new way to report bugs

WarLight now has an official form to report bugs. The Report Bug page will allow you to report any issues you’re having with WarLight. This is linked to from the contact page and the Help tab.

Filling out this form is preferred over e-mailing me directly, even though this form really just results in an e-mail being sent to me. Often when someone e-mails me or posts on the Bugs forum they would leave out crucial information, which ends up taking a lot of my time to figure out. Often I’ll ask for additional information and I don’t get a reply, which leads to the bug not getting fixed. Sometimes so little information is provided that I can’t even figure out where they’re playing the game (WarLight.net, Google Hangouts, iPhone or Android).

This form replaces the Bugs forum, so it’s been removed.

WarLight has just been upgraded to version 1.15.0! This is a big update and there’s a lot to cover, so in order to keep this blog post from getting too long, the new announcements will be split up between a few blog posts. If you’re impatient, you can read all the changes early in the change history tab.

The page that allows you to choose who to invite to new games has received a major overhaul which brings a fresh look and new features.

The UI (user interface) for creating games has been changed quite a bit. The old process was a linear wizard with steps one through five occurring in a sequence. The new process isn’t as linear, however it’s more powerful and should be much easier to figure out for new players.

First off, I want to apologize for changing the UI. I do realize that any time you change UI it causes a great deal of pain. Humans are very habitual creatures, and re-learning how to do something that you used to know how to do is never fun. I didn’t make the decision to change this lightly; I’ve been wanting to improve the game creation UI for a long time. There are lots of improvements I’ve held off of doing over the years in order to roll them all into one big overhaul. It’s like ripping off a band-aid — it’s better to get all the pain at once, not slowly over time.

The new process centers around what I call the main screen: 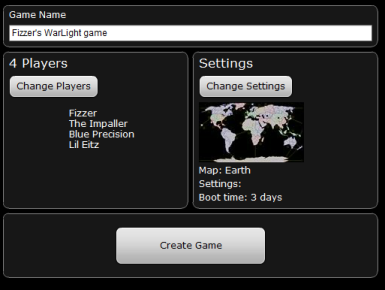 Clicking “Change Settings” will ultimately lead you to the new configuration screen:

Several options that used to be dedicated wizard steps have been moved into the configuration screen. For example, the map is now just another tab instead of its own wizard step. The boot times, practice game checkbox, and private messages checkbox are now just additional settings on the “basic” tab. Other than what’s been mentioned so far, everything should be pretty similar to the previous UI.

The best way to learn the new UI is to go play with it. If you can’t figure out something, post your question to the forums. I’ll be watching and will be able to help out. Feel free to also chime in if you like or dislike the new UI.

Players Mythonian and kcscrag have been recording their recent foray into the 2v2 ladder and posting them to YouTube. The result is an excellent game analysis, which is great for seeing what the 2v2 ladder is like or improving your 2v2 game. It’s a lot of fun to watch and they do a great job with the recording and analysis, so check it out:

Also check out their other WarLight videos.

This weekend Lolowut and Mythonian are hosting a LIVE 1v1 tournament. It begins at 6pm GMT on the 15th (11am West Coast US) There will be a live stream shortly after it starts analyzing the games. Seeing your game get analyzed is a great learning experience.

Anyone is welcome to join as long as you’re online when it begins. Post a reply in this forum thread if you’re interested in playing. Once it begins, this thread will also have a link to the live stream if you just want to follow along.