Warzone has just been updated to version 4.07.0! This update brings a bunch of improvements and fixes to the game.

This update is available on the website and standalone versions of the game now. The iOS and Android app won’t receive this update, because there was a lot of internal code churn I want to let it get tested for a bit before updating the apps. Both iOS and Android will get version 4.07.1 which will have this update’s features and should be released soon.

You can now select Analyze Attack from the game menu in no-luck games (0% luck modifier, straight round) to get these graphs: 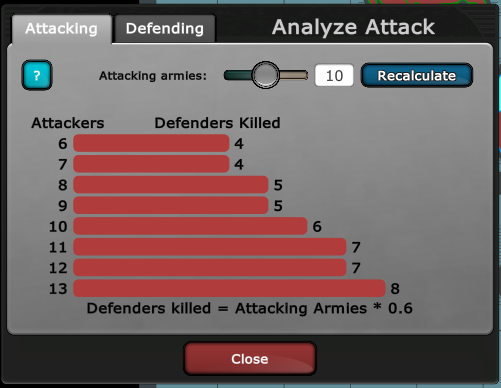 This allows you to easily see how many armies are killed by different numbers of attackers. This info was previously available in the attack/transfer dialog by typing in numbers into the armies box, however this new dialog makes it much easier to visualize.

This new dialog also has the new “defenders” tab, which allows seeing how many armies are killed on defense. This data wasn’t available previously without doing the math yourself, so it’s a very useful tool!

– All: History no longer needs to be downloaded from the server a game you’ve had open from the start, as is common in real-time games.
– All: Fixed a bug that could cause an error when changing perspectives in history. Thanks to Min34 for reporting this.
– Unity: Fixed a bug that caused an error if you pressed escape just as the turn was advancing.
– Unity: Player names now use a fixed font size instead of auto-sizing.
– Unity: Fixed a bug that made loading replays of community levels from the website sometimes cause an error. Thanks to Muli for reporting this.
– Quickmatch: All multi-day games now honor vacations.
– Quickmatch: When waiting for a real-time game, the templates now show your rating, setting icons, and thumbnail.
– Quickmatch: Leaderboard buttons are now colored, blue = template, green = built-in category, red = country.
– Quickmatch: Templates with 0 votes are now automatically deleted. This happens once every 24 hours.
– Quickmatch: All 1v1 templates no longer allow “booted players turn into AIs”. This fixes players from saying “surrendered” when they get booted, such as commonly happened on Imp Rom LD template.
– Quickmatch: If a template falls off the top 40 and then re-makes the top 40 and you unlock it for a second time, it will now pop up an alert letting you know that it unlocked instead of silently unlocking. Thanks to Nemo for reporting this.
– Website: Fixed a bug on profile pages of invited but not-yet-signed-up players. Thanks to DanWL for reporting this.

UJS (originally announced here) is a tool for converting Unity apps to Javascript that I’m working on.

UJS has been expanded a lot in this update, but it still has a ways to go before it can fully convert the entire Unity app. Nevertheless, it’s now possible to view Map Preview links using the UJS tool. To give it a shot, add “&Mode=UJS” to the end of a map preview url, for example: https://www.warzone.com/SinglePlayer?PreviewMap=13682&Mode=UJS

This is considered an experimental alpha at this point, but if you try it out let me know what you think!