WarLight has just been updated to version 3.00.0! This update launches the previously announced coins feature!

Coins are a way that you can make money by winning WarLight games. On the WarLight website, there is now a new Coins tab at the top. Here you can deposit/withdraw coins, as well as join and create coin games.

To get started with coin games, deposit some coins into your account and then join a game or challenge someone!

To commemorate the launch of 3.0, we’re also launching a one-time special event: a 50 player free-for-all coin game! This is the biggest game of WarLight ever played! And the winner gets 10,000 coins ($100 USD)!

Be sure to join quick, as this event is only open to the first 50 players who join it, and then it’s gone. Join it now!

Whenever any game ends, WarLight now pops up a new window that gives you some summary information about the game: 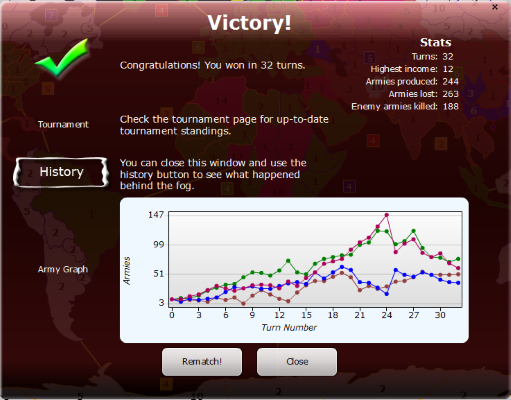 The Rematch button provides an easy way to re-play games with the same people and same settings.

– Game/tournament links are now automatically shown in your browser’s address bar, instead of being shown in the settings.
– The points bar in the top-right was replaced by a coin counter. You can instead see your level progress by hovering over your level in the upper right, or clicking Settings -> Points.
– Increased the number of unearned achievements shown to the player from 5 to 10.
– During the process of joining an auto game, if the game starts without you, you’ll simply be taken to its replacement instead of thrown into spectator mode.
– Eliminated the “Home” tab. Moved Change History and About to Help, Maps to Community, and Unlockables to Settings
– Using “https” is now required, and accessing http://warlight.net will redirect to https://www.warlight.net. Because of this change, you may have to sign in again if you weren’t previously signed into https://www.warlight.net