A Map is a board on which the games are played on. It consists of territories and bonuses.

Every map is divided in territories, ranging from 2 to 3200. Each player holds one or more of them at the start of the game. The basic goal is to conquer all enemies' territories, or to conquer the whole map if necessary. Here's an in-game screenshot: 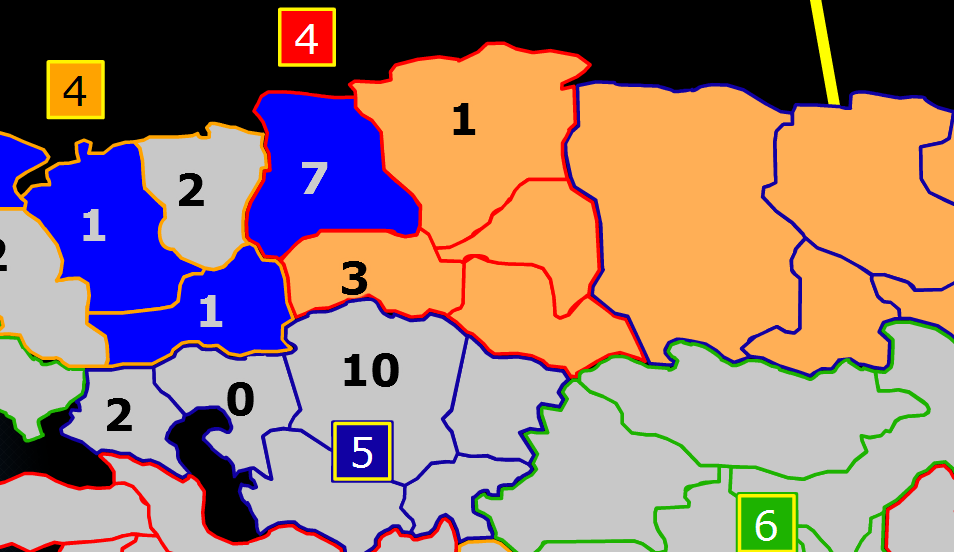 The black is the background, you can't select it nor can you attack or influence it in any way. It's usually black, but some maps have different colors, or even a pattern or an image.

The gray and colored shapes are territories, they each have a name that's not being shown on this picture, but you can see it by holding your mouse over it. The filling has different colors, depending on what player owns it. Here, two players are visible, the blue and the orange one. Some territories have numbers in them, while some don't. This is because your point of view is the blue player, and with this fog setting you can only see the numbers on the territories you border.

The gray territories are neutral, they can be attacked by anyone, and they defend themselves, but they cannot attack anyone else. On most games, they have 2 armies, i.e. you have to defeat two armies to conquer it. But it could as well be, as shown in this example, 0 armies, which means you get it directly if you send any number of armies to conquer it. Also, it could raise up to 10 or even higher, those high-valued neutrals are called wastelands.

From a territory, you can perform a two actions on another territory: attack or transfer.

A bonus is a group of territories that give you additional armies if you control all of them. They can easily be distinguished from each other by their distinct color, as shown on the image above. The red bonus that the orange player controls, called Central Russia, consists of 5 territories. You can also see the red square above it, that is the bonus link. It shows how many armies a certain bonus gives. Sometimes they are shaped differently, or a long distance from the actual territories, or completely absent. If you're unsure, you can always click on a territory, then on the "More Info" button in the window on your left, and you get a list of what territories it borders to, and of what bonuses it is part of. Sometimes there are multiple layers of bonuses on each other, the larger ones are called Superbonuses in that case.