Multi-attack is a game setting that allows armies to move long distances in a single turn.

In a normal game, each army can only be given one order per turn. For example, the same army cannot attack from A to B then attack from B to C in the same turn.

When Multi-Attack is enabled, armies can follow any number of attacks in a single turn. This significantly changes the way the game plays.

In multi-attack mode, you can issue orders in succession which can allow armies to travel long distances as shown: 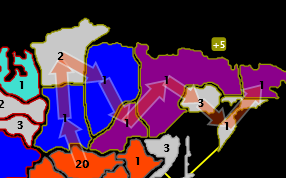 When in multi-attack mode, your attacks will default to being input as percentages instead of armies, unless attacking by percentage is disabled for that game. This is helpful, since you usually won't know how many armies you will have by the time the attack occurs.

Multi-attack should only be enabled for experienced players. Using this mode requires intimate knowledge of the Warzone attack system and is not recommended for newer players.

Note that Warzone allows you to issue attacks from any territory to any connecting territory anywhere on the map. This is what allows entering of a long chain like what the image above shows.

However, sometimes players are surprised that you can issue attack orders anywhere, even if your armies could not possibly be there. While it may seem strange to issue an attack somewhere deep in your opponent's territory, attacks issued where your armies are not present won't actually do anything.