The attack system is very simple. Each army that attacks has a 60% chance at killing one defending army. If all of the defending armies are killed, the territory is captured and all the attacking armies move to occupy the destination territory.

For example, if you attack with 10, you will kill, on average, 6 armies. This is why you generally want to attack with at least twice as many armies as the defender has.

Defenders also get an opportunity to kill attacking armies. Each defending army has a 70% chance at killing one of the attacking armies. The defender's kill roll does not impact whether or not the territory is captured.

Generally, you always want to have overwhelming numbers in every battle you participate in. Clearly, however, this isn't always possible, so you must pick and choose your fights to make the most effective use of your armies.

In the animation shown in the upper-right right, 7 armies are shown attacking a territory defended by 4 armies. Note the left territory had 8 armies to start with, but it can only attack with 7 since one army must remain on all territories.

Let's say that 15 armies attack a territory that has 6 armies.

Let's say that 25 armies attack a territory that has 20 armies.

Within the game, Warzone supplies a tool called Analyze Graphs. These provide an easy way to determine the odds of attacks succeeding without needing to understand all of the math and logic presented on this page, and is a timesaving convenience for those that do.

Calculating how many armies will be killed can be done with the binomial probability formula. If we run this formula on 100 attacking armies, we get a bell curve like this: 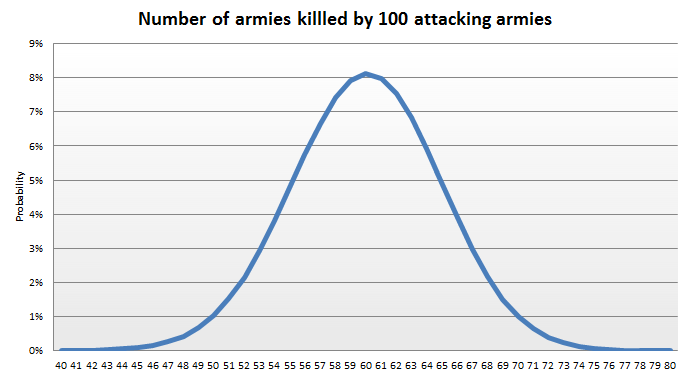 We can see that the most likely number of armies that will be killed by 100 attacking armies is 60, which will happen about 8% of the time. The standard deviation is approximately 4.3465 armies. The number killed will thus be between 55 and 65 armies 75% of the time.

The calculations on this page assume that the game's luck modifier is set to 100%. Most games use a lower value, which reduces the amount that randomness affects the game. To see how this changes the calculations, see the Luck Modifier.

As a sub-setting of the luck modifier, rounding mode also affects luck in the game, and as a result, the attack system.

The default offense and defense kill rates are 60% and 70%, but these can be changed by game creators. Therefore, for multi-player games, it's a good idea to check the settings on your game to be sure.