Attack Only and Transfer Only

Game creators can enable the use of Attack Only and/or Transfer Only attributes that are applied to attack/transfer orders. These are advanced options for customizing how your attack and transfers happen.

Sometimes the ownership of the territories can change before the order takes place. For example, you may think you are issuing an order against your own territory, but an enemy may capture it on the previous order. 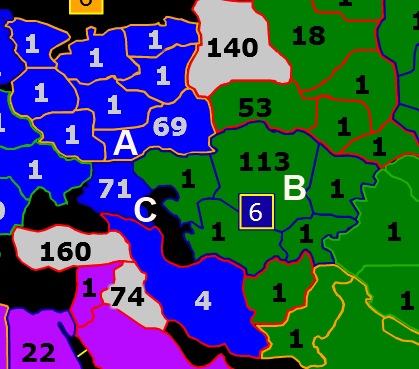 Assume you are blue, and you suspect green will be attacking you on the next turn. Since your 69 on Ufa (A) will be crushed by their 113 on Eastern Kazakhstan (B), you want to bring 71 in from Georgia (C) into Ufa to help defend your bonus. So of course, you issue a transfer order of 70 armies from Georgia to Ufa.

In this case, you can issue your move as Transfer only. While this won't help you save Ufa, it will make it so that if Ufa falls, the armies on Georgia don't suicide themselves into a big stack. Instead, they would simply stay on Georgia.