The statistics window shows you a variety of interesting information about the game. It's divided into three sections: Players, Graphs, and Search. In a team game, there will also be a Teams tab, which is similar to the Players tab except grouped by team.

The statistics window can't see anything that you couldn't tell from digging through the history. This means it can't see through the fog of on-going games or anything like that - it's just used to more easily collect the data that's already available to you. You can return to the Statistics Window after a game ends to see all information.

The graphs allow you to see information about a game in graphical form.

You can view the following metrics on the graph:

The player stats tab shows a variety of statistics about each player. 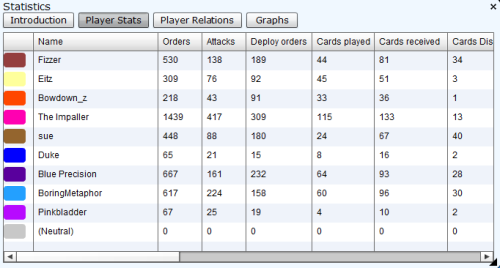 It shows the following metrics:

It's important to understand what the luck numbers represent before drawing conclusions based on them.

Here's an example: If you attack with 10 armies, it's expected that you will kill 6 armies. If you kill 7, your luck for that attack will be +1. In other words, you killed exactly one army more than you were supposed to. You can view the luck number for any attack by hovering over it in the Turn Actions panel when viewing history.

If you wish to reduce the amount that luck affects the game, you can always do so by using the luck modifier.

(this section is under construction)