This mod allows you to limit the attack range of multiattack. Furthermore, you can bind it to cards

[edit] How to use 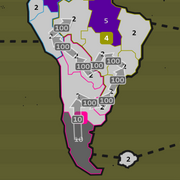 It is quite important to check up on the mod settings when a game uses this mod. There are 2 settings you have to know to use multi attack properly:

If you enable multi attack (or when it is always enabled) you still have to watch out for the limit of multi attacks. The mod keeps track of how many attacks armies have made so when they reach the limit the attacks are canceled, most of the time breaking your normal multi attack chain (an attack gets skipped, and all other attacks in the chain won’t go through since you don’t own the attacking territory) and leads to confusion for most players.

When the limit of multi attacks is not set to 0 attacks after the limit reached will be canceled. If the limit is set to 5, you’re able to make 1 attack as you normally do in every warzone game and pre-route 4 other attacks using the same armies. If you make one more pre-routed attack it will get canceled, leading that (if there are even more) attacks after the canceled attack won’t happen as you would imagine since you don’t own the attacking territory at the time the order is happening.

Note that when armies make a transfer they are completely stuck for the rest of the turn. This is the case in every Warzone game. it is not (yet) possible to cancel this, even in normal multi attack games.

[edit] How to set up