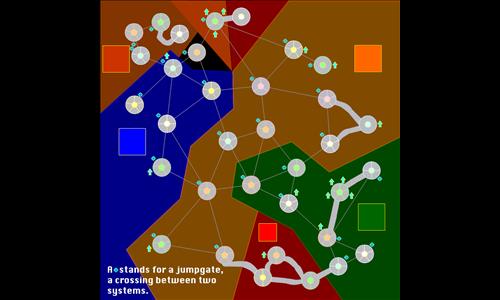 This is a map based on the space exploration rpg, Galaxy on Fire 2. It is the star map.

Review by duplexlion1 on 5/29/2013.
The map is really fun to play on and the simple construction of the planets still allows for some delightfully difficult conquests of them. I also really like the idea behind the Mido Confederation, where one of the planets needed for the large bonus isn't directly connected to the others. For the most part the map is very well put together and I know I'll be playing on it a lot.

I do have one large complaint though. Y'mirr in the Vossk Autocrasy feels much too powerful. It's too far out of the way and too easy to defend to justify the number of bonuses that it has. Most of the games I've played were eventually won by whoever got control of Y'mirr.