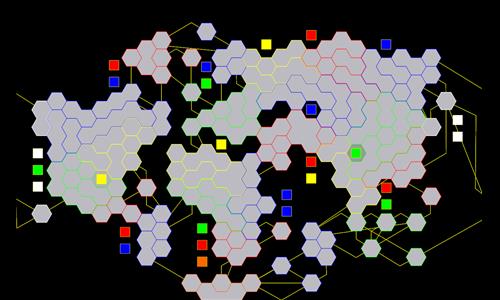 This is a remake of classic world map with hexagonal territories. It is designed for phones - it has big territories in shape similar to round, which should be easily clickable on touch screens. It is very fit - with a weight of 70KB it won't drain you your limited mobile internet. And it keeps exactly the same territory/bonus configuration, as the featured, very popular map, providing the same strategic opportunities.

I realize most people don't like hexagonal maps, but this one has another purpose than good looks.

But I found one connection missing: Mexico - Texas.

And why don't you change territorial name 'Italy' to 'Italy-Balkan'?
Although I am East Asian, I think players live in Balkan will not happy with it.

(Sorry for poor English...)
Response by map creator Issander on 4/27/2013
I decided to keep original layout/names, even if they are strange at times.
3 out of 4 people found this review helpful.
Review by Nathan

on 8/28/2014.
Great map. I like the multi-hex territories in that they allow for more practical division of bonus regions.