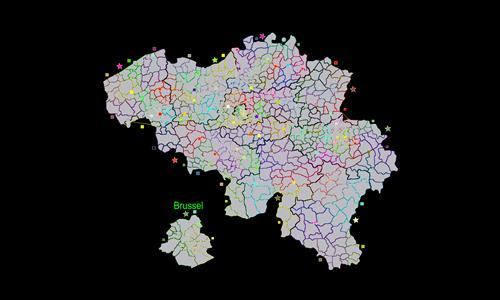 on 4/11/2013.
Fun map. I like the distribution modes. I gave it 4 stars instead of 5 mainly for visual reasons. It is difficult to see how some of the small territories connect to one another. Also, I'm not a big fan of map-in-map insets (like Brussels). Finally, the borders are choppy and often have too much black space between them. My only non-visual comment is that the bonuses should be more balanced. I like ratios of 2/3 to 3/4 of an army per territory in a bonus area.
8 out of 8 people found this review helpful.
Review by

One remark though: Why does Brussels have two separate bonuses for the same set of territories? ("Brussels Hoofstedelijk Gewest" (10 bonus) and "BrusselHoofdstad" (9 bonus))

on 1/21/2023.
I previously rated this map 4 stars. It mostly plays well for a large map, but I've grown to hate city insets. This one is nearly impossible to judge where connects to where.
0 out of 0 people found this review helpful.
Review by wader on 5/11/2022.
Pretty good game. The AI's need to be programed to be able to surrender when it become obvious that they can;t wine. Would spped the game up & make it more enjoyable.
0 out of 1 person found this review helpful.