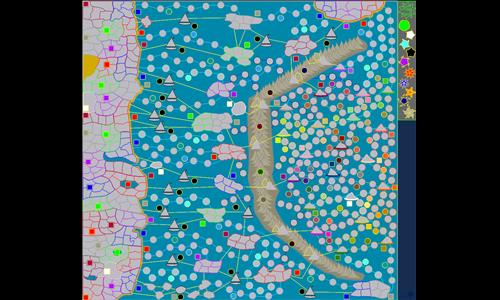 The oceans are full of valuable loot, so why not go out there and claim it yourself?

A slow struggle in normal play, but an interesting concept in Multi-attack - where the water and the land becomes a maze - how do you traverse it correctly?

My second map to be released, third created.

Created 2/10/2013 - and was stalled for a long time after being unable to figure out what to put on the right. What's on the right now isn't great, but it works.

on 2/10/2014.
I'm not sure what to think about this map. I like large maps, so that is a point in its favor. I also like the varied and non-linear connections between the islands west of center. There are numerous scenarios, but I don't feel that any of them are particularly balanced or playable. I also don't get the placement of the negative bonuses. Normally, they serve some purpose such as restricting movement early in the game.

On the other hand, major kudos to the mapmaker for titling the bonus areas with designators such as {B} for boats to facilitate easy resetting of bonus army values. As a map tinkerer, I was particularly impressed with that feature.

In any event, this map needs to know what it wants to be in order to score more highly with me.
4 out of 4 people found this review helpful.
Review by

Krulle on 2/18/2014.
You need a lot of starting luck.
You start with so much malus, that often you only have one chance to go for a bonus. If someone else, by chance, chose the same, you've lost the race.
And the bonus for the chain islands is very high (1 per island), plus they're easy to defend...

edit: much better now, thanks. changed the score given.
Response by map creator

on 2/13/2014
Hopefully the new update will solve some of these problems - the eastern side has negative bonuses where there once was 0 bonuses (And these range from -1 to -4), and while 2/3 bonus FTB's are still possible... well, take some yourself?

As for making the chain islands harder to defend, well, more entrances to the islands have been created :3
0 out of 0 people found this review helpful.
Review by MainstreaM on 2/10/2014.
really hard to win. I like the negative bonusses that oblige you to think twice before you act. On the other hand, once you have the upper hand it is difficult to keep the focus; the one that completes this map has the patience of an angel or is anxious to write a review ;-)
Response by map creator

on 2/13/2014
In theory, the negative bonuses force you to think, but in reality, -1 isn't that much to think about. When you're making 30-40 per turn, 1 income isn't going to hurt at all :/
0 out of 0 people found this review helpful.
Review by Andalorium on 1/21/2017.
Like the negative bonuses giving added difficulty at least early in the game, though there are a few missed connections left.
0 out of 0 people found this review helpful.