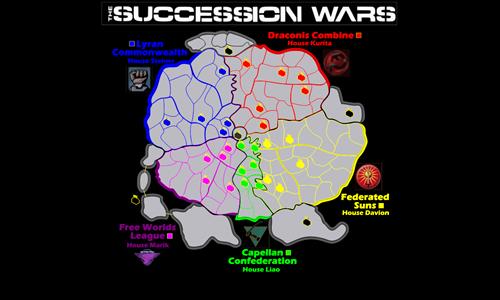 The Inner Sphere is a collection of planetary systems centered around the Earth (Terra). Succession Wars is a map depicting the conditions of the wars fought to take over control of the Inner Sphere. Use set up scenario distributions to play these wars with the correct balance and settings. Best if played with Local Deployments so rules of unit placement cannot be broken...

Krulle on 2/5/2014.
Wow. Now this is a reason to pay. Didn't know there was an option "Local Deployments", as it is for paying members.

Thank you!
Response by map creator

on 2/5/2014
You can also unlock it (I think at level 49), but the setting combined with this map is a lot of fun. It adds a high level of strategy on this map with the manufacturing centers (bonuses).
4 out of 5 people found this review helpful.
Review by Novirtue

on 10/28/2015.
Surprisingly difficult, but interesting.
0 out of 0 people found this review helpful.
Review by

on 9/3/2017.
a little hard to see connections sometimes
0 out of 0 people found this review helpful.