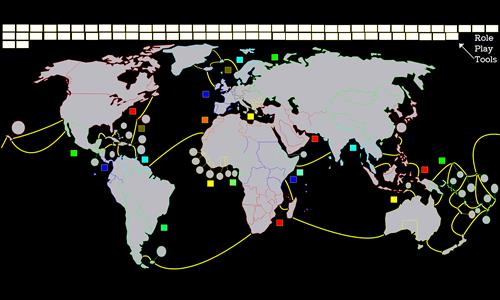 A accurate map of earth in 1914, the world is on the verge of a new era. With the Balklands and South America civil wars recently ending with a shed load of independences the big powers of the world are starting to feel the strain. The scales are on the verge of becoming unbalanced but which way is yet to be decided.

This map features over 30 role play bonuses wich are preset for 0 but can be changed in custom scenairo for roleplays and challenges.

Review by cinereaste on 1/10/2013.
Although I like the idea of a WWI-era map, this map suffers from several flaws.

The use of bubbles to indicate the number of armies in small territories makes things confusing. The Pacific islands are the best example of this. It takes effort to figure out which two bubbles represent territories that are actually adjacent. It should be effortless to determine adjacency. To fix, I would incorporate the bubbles into the territories and not worry about keeping relative sizes accurate. (See the map "Oceania" for example.) You're already using a Mercator projection, after all.

British Honduras and El Salvador are adjacent when they shouldn't be.
Response by map creator skunk940

on 7/1/2013
The El Salvador problem has been fixed. While I can see that having country territories may cause issues but if someone invaded one part of your country a state of war is declared for whole country.

Anyway this is a good map, need some small modification and will be great.
Response by map creator skunk940

on 1/3/2013
Inplanted yellow lines in English Channel and Central American Islands. Now its great!
3 out of 5 people found this review helpful.
Review by

Dødsenglen on 9/25/2015.
On my top 10 list. This this map is so fun.
1 out of 1 person found this review helpful.
Review by Angriest Angel on 1/2/2013.
Hard to tell what teritories connect to others. Love the multiple bonuses.
Response by map creator skunk940

on 1/3/2013
Read the above
2 out of 4 people found this review helpful.
Review by Erzherzog