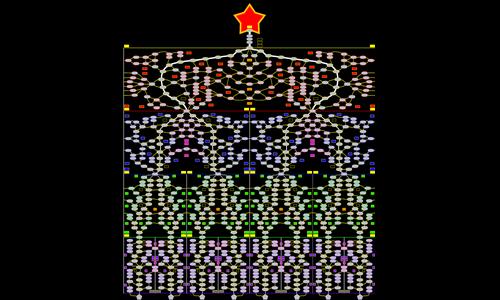 Race through Marx's theory of history towards the ultimate goal of communism. However, there are many challenges along and on the road to this goal. Can you overcome the challenges and bring harmony to the world?

Inspired by the Marxist theory of history, technology trees and exponential growth.

Some notes:
- It is adviced to make abandon cards available on this map.
- Diplomacy cards are not recommended.
- Keep attention to the single zone negative bonuses ("rushes") on the roads. Remember that the number in the bonuses may not reflect the actual bonus you get because they may contain negative bonuses.

A video of our second test game while the map was in development: :)
http://www.youtube.com/watch?v=0VcJU8NHkpE

Changelog:
1.1: Fixed a missing connection near the end of two Feudalism stages.

My concern is that it's simply too big - and by that I mean that most games will be ended well before any player gets close to Communism mega-bonus - and probably before they get into Socialism. I think you could either reduce the number of territories in the map or else reduce the bonuses - which enables rapid conquering of enemy players.

Another suggestion is to eliminate the connections between players in their primitivism phases. In other words, make it so the first chance players have to encounter one another will be once they reach feudalism.

Cosmetically speaking, it would be fun if the territories, or at least the regions, had names that reflected historical developments and/or thinkers and concepts related to communism.

Minor correction - the connection between 23G and 23H is broken.
Response by map creator

on 9/22/2013
Thanks for the feedback. :)
I noticed the connections between 23G-23H and 23C-23D are broken, the fixed version will be released soon, I'm just waiting to see if more errors are found so there won't be too many small releases.

I'm considering making alternative versions of the map in the future, and I agree with many of your ideas.

on 4/3/2014.
Very interesting map with multi attack and heavy fog. Probably a lot of cool scenarios to play.
1 out of 1 person found this review helpful.
Review by

Julian on 5/12/2019.
Really liked the twists and turns
1 out of 1 person found this review helpful.
Review by

krinid on 5/12/2019.
Fun to play but very long. The problem with this map is that it incites warring with the players you start beside, but are rewarded for getting higher quicker. So if you neighbour one-sidedly drags you into an early fight while elsewhere on the map people don't fight until they're much higher, you by default have thus lost the game. You can't ignore the attack on you, as it will reduce your income and make you ineffective at climbing, but by fighting you're spending (wasting) units winning a fight instead of climbing, and others will continue up and likely cut you off.

So it seems to just becomes a matter of whether you have smart neighbours or not. If you don't, you lose. If you do, you're still in the game.

But it was fun to play.

Don't recommend with fog; light fog at most ... the game is so long that you could easily play 40-60 moves before realizing that you had already lost on turn 10.
1 out of 1 person found this review helpful.
Review by usams on 9/16/2013.
you need to change finish part of this map only last territory called "communism" should be 2000 or even 3000. Just played this map and went for star as fast as is possible and get there just 3 turns before someone who spread everywhere. It is too unbalanced like this. You need give a hope for those who go fast also (not false hope like this is now).
Best regards
Response by map creator

on 9/16/2013
Thanks for the feedback. The bonus consisting of the 5 last territories give you 500 armies when you subtract the negative bonuses inside it. I think that is a lot already - in our last test game, nobody ever reached an income of over 900, but when I got Communism plus one of the socialist roads, my income quickly became 3000 and the game sort of wasn't very funny afterwards. (The socialist road bonus is now reduced from 1750 to a 400, but communism remained unchanged and is now by far the biggest bonus in the game.)

I didn't want your only objective to be being the first to reach the star, rather I think the map would give the most fun if it forces you to always consider whether it's worth rushing or if you need to stabilize your current situation.