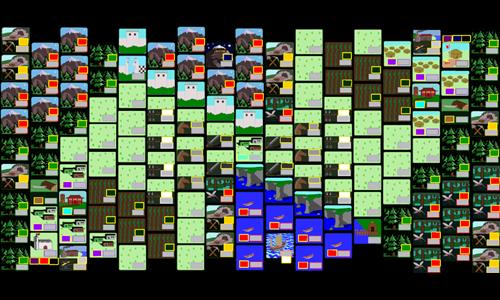 Created by The Number 235

At first, it looks cartoonish.

But then, it looks confusing with the bonus structure (a lot of multi-part bonuses).

Finally, it comes back around to be very simple to understand and a true challenge.

A brief example: You need to control your lumber mill before you get any of the tree bonuses.

The twist is, that your lumber mill doesn't give bonuses for their trees. meaning when you progress on the enemy, rather than being a landslide positive income for you and negative income for him, its just a small hit on his bonus.

Map Creator: Have you considered making the center keep part of every bonus? Essentially bringing in an new element of gameplay that if you can destroy the palace, you've ruined their ability to function?
Response by map creator The Number 235

on 8/24/2012
We had discussed making the castle part of every bonus, but ultimately we had decided that these functions didn't need a king or leadership in order to operate/benefit. The only one that we almost felt compelled to link to the castle in order to operate/benefit were the Dynasty's. The reason we did not however, is because.. that is where the leadership is. So ultimately, we created the super bonuses for the castles. (Master of the Elements, Dynasty, Yoritomo's Alliance/Ye Lu Chu Tsia's Observatory). We did this because we felt the same way as you do, in that.. if you take the castle of your opponent, it should be a crushing blow but I don't think that it should be the curtains.. so we made the sum of all 3 castle bonuses 12. So, in the end.. it leaves open room for plans of attack.
In response to the 'twist'.. I was going to make it in the landslide fashion that you were talking about, however.. in the end we decided that these bonuses shouldn't be able to benefit from crops/mines/lumber so far away.

-235
15 out of 15 people found this review helpful.
Review by rkkell on 10/21/2012.
This map seems like it would be fun for 1 on 1 human players. I like the concept and the whimsy. Did not play well against the AI. The AI got bogged down in the negative bonuses trying to achieve the larger bonus. It did, eventually, but not until I had filled the entire board. Still, an enjoyable map with some really interesting strategic possibilites. Thanks.
2 out of 2 people found this review helpful.
Review by Evan McCarter on 11/20/2013.
one small mistake: the negative bonus of the swamp square on khan's side (south of the rare gem mine) needs khan's command post to take effect.
to put that in different words, the bonus "66" is broken and asymetrical to the one on the other side.
again, it's the swamp square nearest the gem mine on khan's side
2 out of 2 people found this review helpful.
Review by Novirtue

on 6/10/2013.
Fun map, but somewhat laggy for us poor peasants with outdated computers.
2 out of 3 people found this review helpful.
Review by barakobama on 3/2/2014.
All of the pictures make it hard to see the armies. I played against the computer. The AI was totally passive and waited for me to conquer almost the whole board.
1 out of 1 person found this review helpful.
Review by