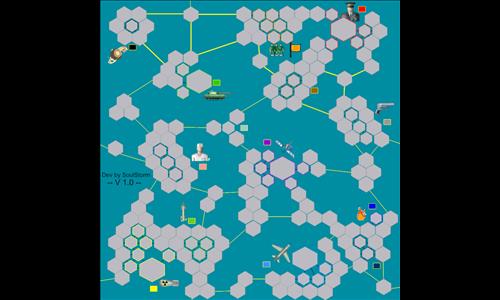 Rush in the Base

My idea in this map is to use a standard hexagon to design every territory, many hexagons draws an honeycomb battlefield.

It's just a beta prototype, is playable but it needs a couple of adjustments and probably bonuses need to be balanced in a better way.

My idea of template for this map was a distribution where neutral territory start with 0 army, players receive just 1 army base per turn and an extra army every single territory conquest. For this reason i tryed to put bonuses inside regions (usually it's the region itself), btw honeycomb means that you could be attacked from every direction then playing with "common" borders does not make sense.


It's my first map so if it sucks just tell me and i'll never do maps again =)
Sorry for my english too (cause it sucks for sure xD).

Maybe rebalance some of the bonuses for # territories/connections.

on 3/13/2015.
It's a neat concept, but the way it's laid out it doesn't make much sense. Also, the connection issues are frequent enough to be really annoying.
0 out of 0 people found this review helpful.