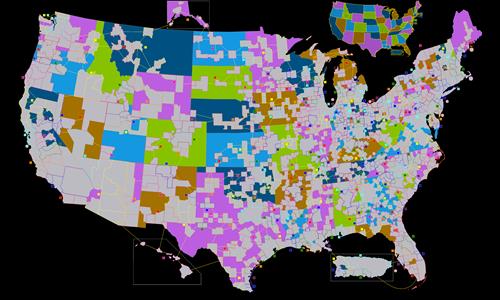 2009 US Core Based Statistical Areas

State bonuses were determined by dividing the number of territories in the state by 5; rounding was determined by the state's bonus structure and surrounding corrections.

Thanks to the 101st, Lynx, and Warlighters for helping test the map as well as everyone who commented on the forum thread! ^^ (kevin#1 won the test game)

on 4/23/2014.
A must play map :) Looking at this map, i can already know the the map creator did lot of hard work on researching and making this map. Unlike the big U.S. map, this is more suitable for strategy playing. The background design impresses me too because it is colorful and aestheticly appealing. However, there is one very VERY huge mistake. Puerto rico is way too big and the creator obviously doesn't like Alaska :D But, i will give this map a 5 :D Well done!
Response by map creator

Also clearly that box next to Puerto Rico is a magnifying glass. (It's also magnifying Hawaii! Yay!)
12 out of 14 people found this review helpful.
Review by Nathan

on 4/23/2014.
Great map! Very challenging and very interesting. I would recommend that players increase the superbonus values for each state as the income tends to be a little low and controlling an entire state is a definite achievement.

on 6/19/2014
Superbonus value is now (Territories/5), which should give slightly less than a 1 territory:1 army bonus ratio for states (when including the smaller bonuses.) This should produce a slightly higher income rate. (And now, if the players want to increase superbonus value, they can just multiply the default values!)

Fixed connections are fixed too.
8 out of 8 people found this review helpful.
Review by

Michelangelo on 4/25/2014.
Solid 4/5! Would give 4.2 if I could. Compared to normal US maps its unique and includes different shaped territory's, different from the normal boring box shapes. Very well done map indeed.
Response by map creator

on 6/19/2014
Thanks! The idea with this map was to provide a version of the US that would offer chokepoints and different shapes - while it does come at the cost of not mapping the whole US, it does have its own unique flair.
2 out of 2 people found this review helpful.
Review by benc on 12/29/2014.
The Good: Great original concept and well-researched. Neatly avoids the problem with the territory size issue on many US maps by leaving rural areas empty.

The Bad: The colors are extremely distracting and make it very difficult to see what's going on. Please use a dark gray for the state backgrounds, and consider using fewer unique bonus colors too.

Bottom line: Quality map except for the excessive use of color which brings it down a couple notches.
2 out of 2 people found this review helpful.
Review by Hurricane on 7/3/2014.
This map takes forever! There are so many small territories in the Midwest.
1 out of 1 person found this review helpful.
Review by Riyamitie on 7/13/2014.
This would take me too long to put in the description, so when the 1.3 update gets in...