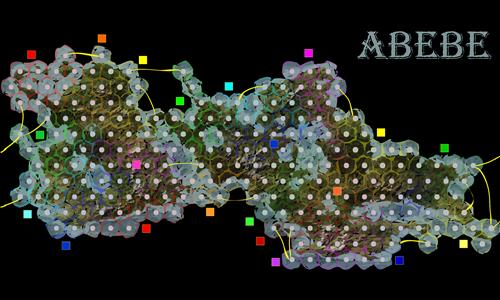 The land is at war. Be the conqueror who unites the world and brings peace to people who have never known it.

Review by Teckmantle on 7/30/2012.
Two problems (which may be personal). The 'camoflage' colouring behind the hexagons and the size of the numbers. The colour scheme makes it difficult for me to see the board, and the size of the numbers means I had to keep zooming in to see the numbers and out again to get an overview. I found it irritating and won't be playing this map again. One dropped link: 'Dungeon of the Lat'
Response by map creator guyanonymous on 7/30/2012
Thanks for the feedback!

I agree with what you're saying re number size. In testing, the people using lower resolution monitors (less than 1600x____) mentioned the same thing. Unfortunately, I can't/don't set the size of the numbers themselves anywhere. Out of the 10 of us that tried it in 2 games, it was fine for most, but the two with lower res (laptops/netbooks) found they had to zoom in/out too much.

The colouring behind the grey circles (the map itself) was designed to make them the map more visually interesting than just the lines/borders and big grey boxes as an experiment (I find those visually boring and dull). I just use the bonus boxes to confirm exactly which territories are in each bonus (and the blending of colours at the edges of bonus zones is another subtle indicator. Again, it's all an experiment.

I found and fixed that link we missed in testing. Thank you!

I appreciate your feedback, even though the map wasn't a good match for you (and you agree with 2/10 or so people who tested)
3 out of 3 people found this review helpful.
Review by

Gameplay:
Fun vs multiple opponents, hard to acquire and defend a bonus. But once that is achieved, victory might come quick, or it goes to a 1vs1.