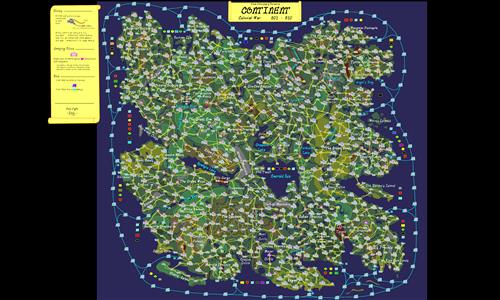 During the Possession War, Mankind took control of the suddenly emerged Continent from evil Drakens.
Then Kingdoms of Gondawa send their Lords to colonize it.
Will the Mont Azur Peace Pact remain while the lords grows and rules their ways ?

DISTRIBS : Better to respect the number of teams when indicated

4 Teams :
- 4 Kingdoms Landing : Each team has 4 starts from ports
- 4 Insurections : Each team in a corner

on 4/19/2013.
3 stars for now, but it could be a 5 with some work. This is a nice looking map and fairly fun to play. Unfortunately, it is so cluttered with detail that it's difficult to see the actual territories. Also, although the bonus system with the castles is explained well, it makes gameplay awkward and tedious. Games tend to be extremely long - and not just because the map is huge. Rather, the bonuses themselves are too small and the number of bonus territories is too large and the territories themselves are far too scattered to be able to collect effectively.

[SoL] wbwright on 10/11/2012.
Creative and different. Would like it smaller.
1 out of 2 people found this review helpful.
Review by