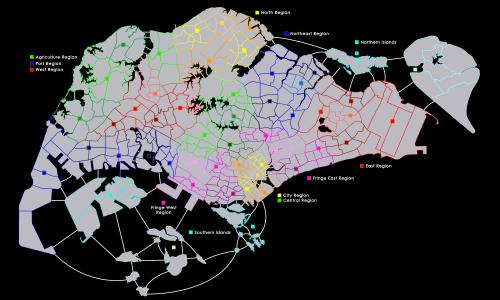 Singapore is the first map I have created. It consists of about 380 territories, divided into larger areas and further divided into regions, each with their own bonuses.

Based on the subzones of the urban planning areas of the Master Plan 2008 by the planning authority Urban Redevelopment Authority, most of the territories are drawn based on the actual boundary, while some are further divided or merged for playability. This map have gone through several tests and checks to ensure fairness all over the map.

Singapore is a Southeast Asian city-state off the southern tip of the Malay Peninsula, with Malaysia and Indonesia being its neighbouring countries. Singapore is highly urbanised but almost half of the country is covered by greenery. More land is being created for development through land reclamation.

I hope you guys love this map and enjoy fighting! :)

Review by Lavaking on 10/24/2012.
The bonuses of this map are well-balanced, and so are the super-bonuses.
The graphical design is nicely done and clearly arranged.

However, territories are not only connected if they have a common border, but also if they are touching in one single vertex only. Of course whether one likes this is personal preference, but at least you should be aware that territories are connected "diagonally" on this map, which results in territories with 7 to 9 neighbours on a regular basis.

(I know this style of connection is not uncommon in some other maps als well. In Singapore, however, most territories would still be connected richly even without diagonal connections due to their shape.)
Response by map creator aranbear on 11/8/2012
I was also thinking about allowing diagonal connections when making this map, whether it would connect to neighbouring territories too much. But I guess, like what you've said, it depends from people to people.

Thanks for the feedback by the way, I'll take note of it for future maps if any. :)
2 out of 2 people found this review helpful.
Review by Nathan