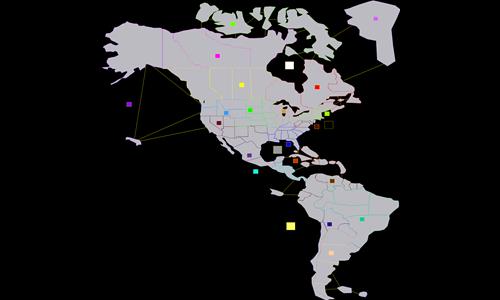 I Do Plan To Redo this map. Hopefully very soon.

Made By Nate R.

on 3/24/2012.
This is one of the worst maps I've ever played. The map maker made a hundred treads for the same map, and never listened to any advice. The bonuses are unbalanced, the visual representation of Hawaii, Greenland and the Caribbean islands is a mess, and the Alaskan border doesn't include the panhandle.
The borders in any country but the US and Canada are completely made up, and then the maker says something like it being better than some mysterious map he's referring to. I can only but wonder why anyone would rate it a 4, I think the creator just made a bunch of duplicate accounts and rated it himself.
17 out of 23 people found this review helpful.
Review by AmethyCyan [Retired] on 3/3/2017.
Relatively balanced, and an exciting land grab to people who just want to rack up income.
2 out of 3 people found this review helpful.
Review by David Rader on 6/1/2013.
cool map
2 out of 4 people found this review helpful.
Review by

Seleukos on 1/22/2021.
Having played several fun games on Nate's Big Mexico I was interested to see a map of the Western Hemisphere by the same mapmaker. Having taken a closer look, I marvel at how much said mapmaker improved between this map and Big Mexico. The problems with this one are too numerous to list here, but I'll very briefly mention bad border tracing, bad bonus design, and a quaintly Anglo-centric definition of North America that includes only the US and Canada, which are allotted 61% of all territories on the map, those also being only sub-national territories with reasonable borders. Perhaps this map is best left forgotten.
0 out of 0 people found this review helpful.
Review by Commander C {Warlighter} on 6/23/2012.
It's a great map, from what I know it's all accurate, but I think that Mexico, and Alaska and Hawaii should be worth more bonuswise.
2 out of 7 people found this review helpful.
Review by Olorin