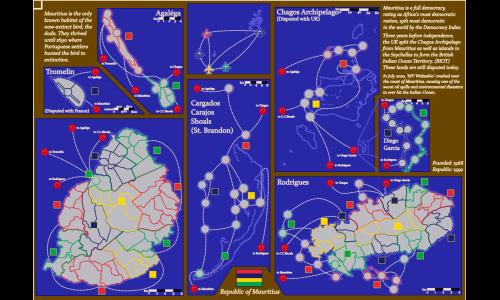 The Republic of Mauritius is an island nation off the coast of Africa, discovered by Portuguese sailors in 1509. This map includes the main island of Mauritius, as well as Rodrigues, Agaléga, and the Cargados Carajos Shoals; as well as disputed territories including the Chagos Archipelago and Tromelin. Mauritius contains Africa's only full democracy and has one of the more diverse populations in Africa, as well as being the only African nation where its most practiced religion in Hinduism.

on 10/17/2022.
OK, so these chords are used for more than just playing Ska music, but they are certainly very important to this style. As you learn these chords, you will find that in a way, you may already know them. They may be a part of some basic chord, or can somehow be related to a common chord. In Ska, a bright high sound is used rather than a bottom heavy power chord or barre chord. So these "Ska chords" are going to be played only on the first 4 strings.
Chord Chart The first chord you should already know as a basic F chord. This F chord shape can be played on any fret from the 1st to the 12th to get any major chord. In order to know what the name of the chord is, you will need to know the names of the notes on the neck of the guitar.

on 10/12/2022
This is a place to review maps, not show off your strong political views on small island nations in the Indian Ocean.
1 out of 4 people found this review helpful.