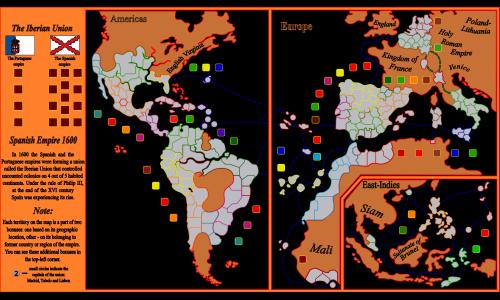 In 1600 the Spanish and the Portuguese empires were forming a union called the Iberian Union that controlled uncounted colonies on 4 out of 5 habited continents. Under the rule of Philip III, at the end of the XVI century Spain was experiencing its rise.

Scale:
Note that the scale differs in different parts of the map in order to emphasize the most significant regions. These areas are separated by borders.

Historical accuracy:
1. A few provinces in East Africa and India are absent from the map to make it more comfortable and playable.
2. Some geographic and political bonuses contain the same territories (like Granada and Emirate of Granada). This is impossible for a Warzone map, thus three insignificant alterations are made (Andorra is given to the Kingdom of Navarre, Catania is given to Naples, two African provinces are given to the Emirate of Granada).