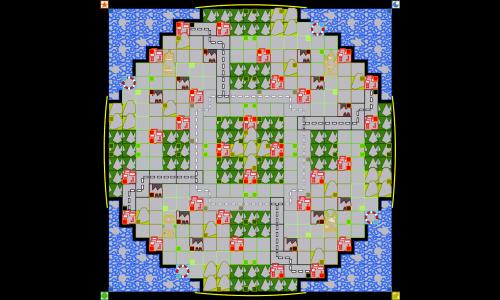 While the map is original, the idea is based on Advance Wars (2001).

As a good follow-up to the first map I made, and a way to celebrate the 20th anniversary of the series outside of Japan, here comes another map with a Wars flair, with HQs being as valuable as ever.

Your HQ can get bonuses up to 6 tiles away horizontally, vertically or diagonally, and every bonuses needs an HQ to work.
To make it easier to visualize, the bonus squares are on the same corner as the player who can get it.

The default distribution has 4 territories per player. There's a manual distribution variant for team matches too.

on 9/24/2021.
A much more improved bonus system over hat harbor. This map manages to make the HQ fee important without being a 'win button' if another player gets a second. However a small concern is that if the players claim their corners and all butt up to one another then it could lead to a long stalemate. If playerA manages to break into playerB's corner, PlayerA wont be gaining any additional income even though they're taking territory, which would make it easy for playerB to push back to neutral. I understand the push-and-pull is important, but consider letting each player benefit from each bonus. Otherwise this is a good map, and I hope to see more!
Response by map creator

Rinnosuke on 9/24/2021
I did think of this.
That would be why the bonuses in the middle are accessible to multiple players.
The only side effect is that it's doubled once you gain a HQ.

Only 36 bonus troops are "safer" in your corner of the map, but you can get up to 60 more via contested bonuses.

The main reason that every bonuses aren't that way is because doing so would basically double every bonuses once you conquer an HQ, making it a 'win button'.

Thank you!
3 out of 3 people found this review helpful.