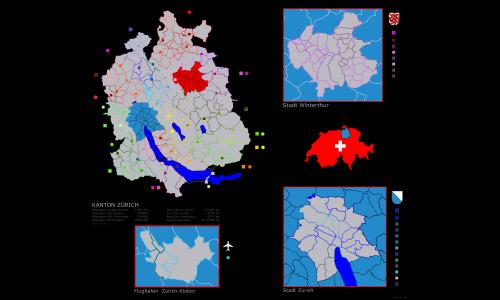 The Canton of Zurich is one of a total of 26 cantons of the Swiss Confederation (Switzerland). Although it occupies only seventh place in terms of area, it is by far the most populous canton in Switzerland.
Zurich joined the Swiss Confederation in 1351 as the sixth canton.
Zurich is one of the German-speaking cantons and, like the rest of Switzerland, is Christian in character. Historically, the canton of Zurich was the first Swiss canton to adopt and enforce the Reformation.

This is my first map.
The cities of Zurich and Winterthur as well as the municipality of Kloten with the airport are not shown to scale in their enlargement!
I have equipped the airfield with dividing lines, since these are the municipal boundaries