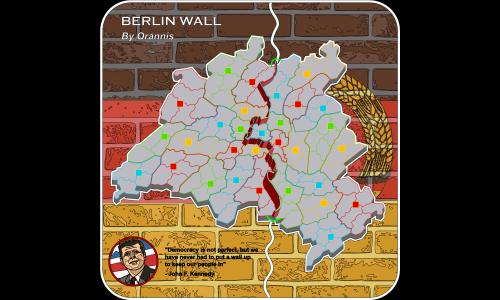 Following the division of Germany by the allied forces after World War 2, parts of Berlin were allocated to be controlled by Britain, France, the United States, and the Soviet Union. The Western allies ended up merging their districts into West Berlin, and provided immense funding to fuel capitalism in the city. Meanwhile, the Soviets held on to their section of Berlin and in it strictly enforced communism. The Soviet sector came to be known as East Berlin.

Throughout the next decade and a half, millions of East Berliners fled to West Berlin, to escape the communist impoverishment and brutal law enforcement of East Berlin. In 1961, the Soviet Union erected the Berlin wall almost overnight, in order to prevent East Berliners from escaping. Berlin became a symbol for the capitalist cause during the cold war, due to the stark contrast in wealthiness and freedom between either side of the wall.

The wall eventually fell in 1989, and the Soviet Union fell two years after.

Thank you to Splat and Nikitan!