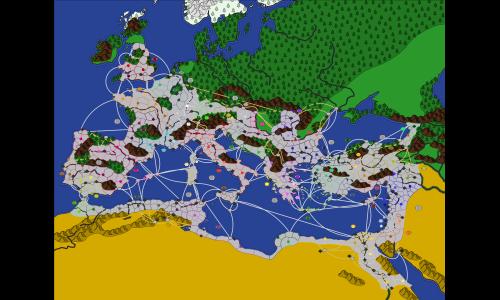 For a while, I've been wanting to make a map of Rome, but because its history is so expansive and its borders changed so much, I've never been able to decide a good time period. For this map, I've chosen to use the borders of the empire around the beginning of the Third Century Crisis, where Rome entered a near century of civil war and infighting that almost brought the nation to an early end.

Note that number of territories in each region are not necessarily reflective of its population, there are territories in Syria for example, that had populations in the tens of thousands, while some places in Hispania would've had around a hundred.

Review by SerGlush on 2/26/2021.
Wow, I don't know how you create maps that fast, but awesome map as always!
5 out of 5 people found this review helpful.
Review by Master Activision

on 7/28/2021.
This map is one of my favorite WZ maps, it offers an opportunity for unique early/mid/late game strategies, the territories are historically accurate, it's a great team map, very balanced. One thing that makes it a great team map is that the larger territory bonuses are not as significant, so sharing smaller bonuses in a region with a team does not significantly hurt your income.
0 out of 0 people found this review helpful.
Review by