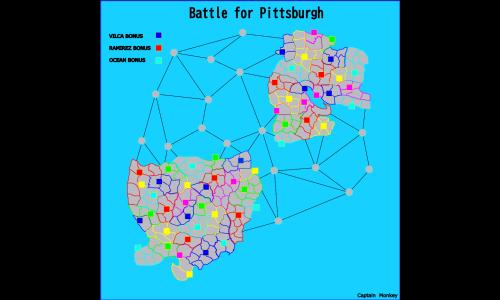 Battle for the Vilca Clan

Special thanks to David Vilca

Seleukos on 12/17/2020.
A good attempt at a first map. There are some issues you should try to fix or take account of in future maps, though: i) The entire upper island is coloured like its superbonus, rather than each individual bonus. That happens when you assign the superbonus to territories before you assign the individual bonuses. It's been done right in the lower island. ii) Bonus borders are not very consistent. Sometimes they are adjacent, as is normal; other times there's an overlap, which is never a good thing; and other times there's a gap between them, which in some maps signifies an impassable barrier, which is not the case here. iii) Bonus markers sometimes obscure connections (such as the one between Camargo and Villa Hidalgo). It's best to avoid that sort of placement. iv) Corner connections are inconsistent; sometimes territories connect across corners while other times they don't.