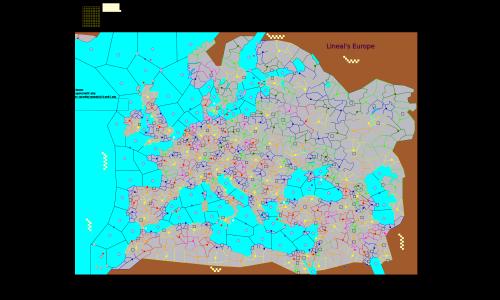 My Europe map.
I was planning to do similar bonus system like on Biomes or Elitist Africa, but I had too many bonuses for warlight.
Instead I will release this version.

There are 120 cities. Each one worth 1 army. Each port city + sea territory give an extra army too.
Each land bonus has either 2 or 4 territories.

I cut out from this map some bad inhabited territories to make counrties' strenght more real.
To determine strenght of the country I was looking mainly on 3 factors:
- population.
- area.
- cumulative production of steel.

I hope you will have fun playing on this map
lineal2012

Rethgif on 7/10/2021.
Wow, what a fun map to play. Well laid out with excellent attention to detail. Huge map (which I love) with no missing connections that I could find. The battle lasted well past conquering half the map. Cleanup took considerably less time on this map than on other, similar-sized maps.

A couple of things that may be particular to my game, but which I'd like to note here. I was able to quickly hobble two AIs but the third grew to be a monster. Not only did it have large numbers of armies to throw at me, which made it more fun, but the AI seemed more "intelligent" on this map than on many others. If the game's AI prioritizes territories that have more connections, that could explain why the AI kept pressing for the more critical territories, making for a lively series of battles. Overall, this map was great!
0 out of 0 people found this review helpful.