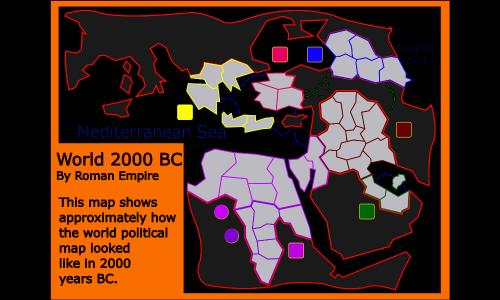 This map shows approximately how the world political map looked like in 2000 years BC. The map doesn't contain all continents because all states were concentrated in Afro-Eurasia at that time. According to the low amount of territories, this is an interesting map for fun :)

Seleukos on 7/25/2020.
An interesting concept that makes for a cozy little map. I have, however, certain misgivings. In 2000 BC the Indus Valley Civilization in India was at its peak; but I can find no information on any 'Kingdom of Alsze', other than mentions of a Kura–Araxes culture that had declined by that date. Also, the north Syrian coast had some of the world's oldest cities (like Ugarit) which are absent from this map. Concerning map design, some of the bonuses are exceptionally big for such a small map, particularly Mesopotamia with its 10 territories, while Egypt benefits enormously from a doubling of its income by the application of a superbonus equal in value to the sum of its constituent bonuses. Technically, the lack of a territory in Cyprus (another important urban center at that time) makes Anatolia's direct connection to Palestina counter-intuitive.
3 out of 3 people found this review helpful.
Review by