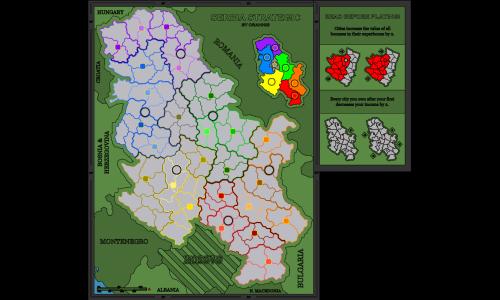 Review by lolgg on 7/15/2020.
The map is good all in all.
But as i live in this country, i have a few objections.
1. The biggest bonuses make no sense in real life, we arent organized as such, but i guess if it was done for strategic purposes that is your artistic liberty.
2. The borders of districts and municipalities arent as correct as can be, but i see it was made on a pixel background i guess, but i mean there are clearer maps i suppouse.
3. The cities, this one really buggs me. Most of them arent in the correct position. Most of these are fringe cities, they arent all that important, its weird that you left out.. the capital Belgrade, the biggest city in Vojvodina (northern province) Novi Sad, and cities like Nish, Kragujevac, Subotica. The ones you picked, are somewhat sizable, around 40/60 k people, but yea.
If it was a first work, i think its good, but in future projects i would suggest you put a bit more research into the map.
Response by map creator Orannis on 7/16/2020
All of those things were actually done on purpose, in many cases I had to choose between real life accuracy and strategy. I prioritized strategy, it’s a strategic map after all.

The big bonuses are completely made up, Serbia’s large regions are so large that there are only 3 of them, and using them would render the city system useless. I are designed the big bonuses in this map to be linear, with the city near the middle.

This is so the outer bonuses of a big bonus are relatively far from the city, so you can’t just steamroll a big bonus and defend it easily. This is also why the cities used aren’t necessarily the biggest ones in the region, and why they aren’t exactly where they are in real life.

When making the borders, I completely focused on how I could make them strategic, i.e. which territories can double border or triple border bonuses, which territories connect to all territories of a bonus, etc. I also tried to make the borders look clean, meaning I couldn’t include every nook and cranny.
6 out of 6 people found this review helpful.
Review by

Seleukos on 7/13/2020.
Interesting concept, very nicely designed.
4 out of 5 people found this review helpful.
Review by

on 8/18/2020.
Very nice concept with the cities giving extra income. Only improvement could be to tweek the extra income from cities a bit. Rn, a 1+2(+200%) and a 4+2(+50%) is not really balanced, with the small bonus getting a
times as big income boost as the big bonus.
2 out of 2 people found this review helpful.
Review by

Boka B
Response by map creator Orannis on 7/13/2020
I didn’t add Kosovo because I wanted the map to be about 130 territories. It is ambiguous as shown by the diagonal stripes.
0 out of 6 people found this review helpful.